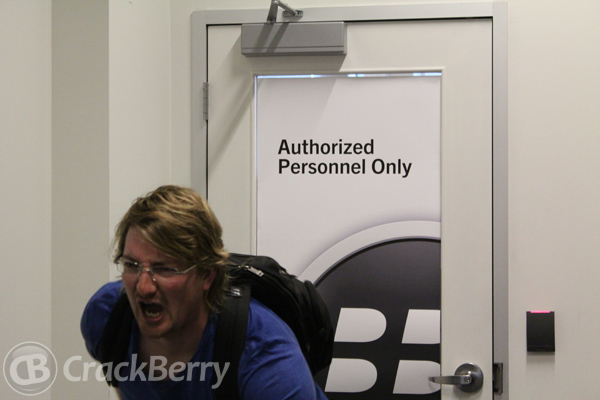 I have sooo many articles to get written for CrackBerry right now I don't even know where to begin.

My second annual trip to Waterloo, Ontario -- the birthplace and hometown of BlackBerry -- was a whirlwind. From the time arrived to the time I left I was busy, Busy, BUSY. This is literally the first moment I've had to sit down and type something (other than during the AGM live blog of course).

Tuesday morning was Research In Motion's Annual General Meeting of Shareholders. There are still a few things for us to talk about here, not the least of which is a story coming in the next couple of days about a certain attention whoring individual that I was able to observe in action for the first time (let's just say it took every bit of my will power to keep my fists in my pocket). The backstory on this guy needs to be told properly... and it will be.

That afternoon I finally had a chance to spend some quality time getting to know the new BlackBerry 10 touchscreen keyboard on a Dev Alpha device. At BlackBerry World I *saw* it, but this was the first time I really got intimate with it. As a self-proclaimed aficionado of keyboards, this was time well spent and I even learned a few things. You'll want to stay tuned for my thoughts and to learn what's new here.

On Wednesday I had the opportunity to sit down in person with RIM's new Chief Marketing Officer, Frank Boulben. He's only four weeks into the new role, but I peppered him with questions and he handled them extremely well. Marketing is one of those areas where CrackBerry readers have often been critical of BlackBerry over the years, and I think Frank said a lot of things that are going to make us fans very happy. I'll be bringing the Q&A to the blogs just as fast as I can.

Not on the schedule, I then received an awesome surprise. As I was finishing up my last question with Frank, RIM's CEO Thorsten Heins walked into the boardroom. He skipped lunch so he could say hello to CrackBerry. We talked about the AGM and BlackBerry 10 and its upcoming launch. I asked for clarification on the Q1 2013 launch time frame and... with both Thorsten and Frank in the room, gained some new insight into the BlackBerry 10 go to market plan.

Oh hey, I think I just figured out what my next story is going to be... Stay tuned!