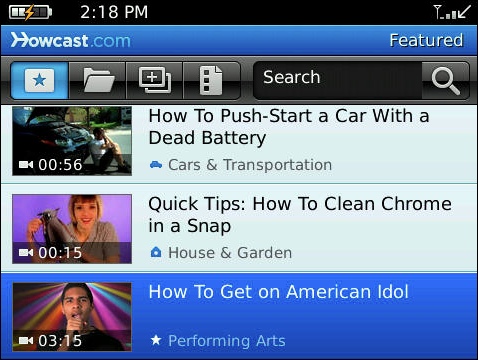 For everyone out there that considers themselves a do it yourself person, you'll certainly want to check out the HowCast application that recently appeared in BlackBerry App World. The application is a rather small download and mainly acts as a launcher for mobile versions of the videos available. But, that's not to say it's just a launcher. The app does allow for some additional features, which are pretty cool.

Having checked out the app for a few days now, it's certainly good to have around just in case. I can't foresee anyone needing it on a daily basis but given its small download size it's no bother to have it installed. At the moment, BlackBerry App World indicates that it's only available for all devices in all countries but that seems conflicting of what is said on the HowCast blog. The blog indicates availability for the BlackBerry Bold 9700 and BlackBerry Storm 2. Maybe we should be posting our CrackBerry BlackBerry how to videos there as well as YouTube.