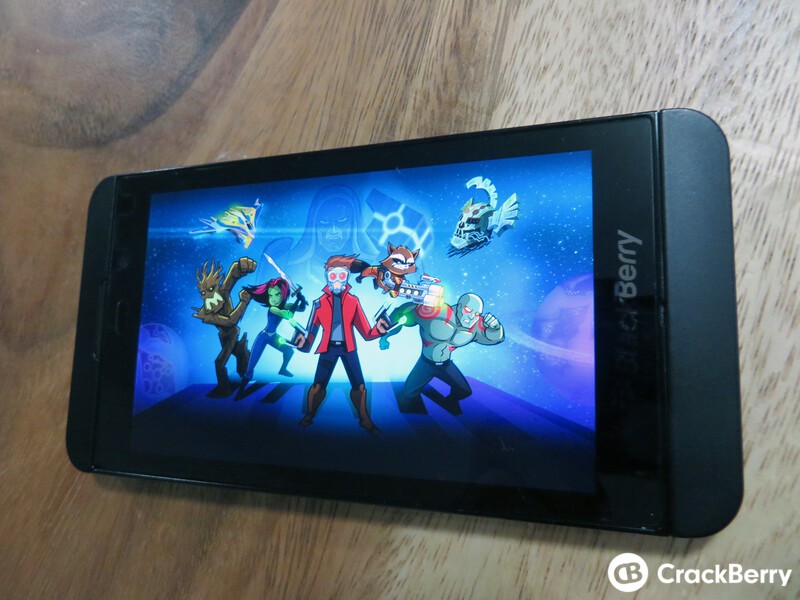 Marvel Studio's Guardians of the Galaxy film opens in theatres on August 1st, but you can use your BlackBerry 10 smartphone to get into the interstellar action with Guardians of the Galaxy: The Universal Weapon game. If you're up to having a hand in saving the universe, pick this one up from the Amazon AppStore. I was browsing through Marvel's site, looking for information on the upcoming movie, when I stumbled upon the details of this game. So being a fan of anything superhero related, I installed this game faster than you can say "I am Groot".

In a nut shell, Guardian's of the Galaxy: TUW is a gesture based real-time combat game. The objective is to retrieve the five scattered pieces of the Universal Weapon before they fall into the hands of Ronan the Accuser. You control a team of up to four characters with various skills that include ranged attacks, close combat and healing. The controls are easy to understand but it's the game play that makes it interesting. Tap on a character and drag your finger or thumb to where you want to move them. To attack , perform the same action but in this case, drag to an enemy. Basic attacks are automatic, but you can also unleash specific character skills and combo skills. These special and combo skills are available as buttons and are visible when a character is selected. Active characters, those that are in your current team, gain experience after each level, which increase their stats (health, defence, attack power, attack speed, etc).

Besides gaining experience, you also gain silver, to purchase equipment that will boost your stats, as well as earn ISO-8 chips, which also have the same effect. ISO-8 (or Isotope 8) chips of the same colour, can be combined to increase their effect. The game has two modes to choose from; Story Mode and Arena Mode. As you progress through the game in Story Mode, you'll be able to unlock members of the Guardians, both current and from the original team from the 1960s as well as other heroes and enemies, some of which you'll have to only use in Arena Mode for survival. Currently we're tease with a space saved for the Hulk but with the caption "coming soon" underneath; well at least I can unlock the Thor-like Beta Ray Bill!

Check out the official Marvel trailer:

So far I've been playing it on my Z10 and it's been working wonderfully; just a couple of missing characters in text after completing a level, but nothing that affects the game play in the slightest. The characters respond quickly to gestures, except for Groot; but what do you expect from a flora colossus? If you're up to the challenge, and you have $4.99 available, grab your Element Guns or sword and get into the action. Let us know in the comments what you think of it. I don't have my movie buddy to take anymore, who wants to go see the Guardians of the Galaxy?

Download Guardians of the Galaxy: TUW/Learn how to install apps from the Amazon Appstore