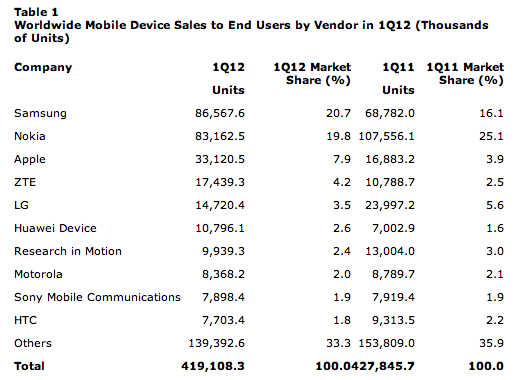 Industry research firm Gartner just released its latest data on mobile phone sales for the first quarter of 2012. There are some interesting points to be pulled out of this report that I wanted to address. We have to work through a bit of data first, but we'll bring it back to BlackBerry very quick.

Samsung dominates Android. Gartner's data says that Korea-based Samsung shipped over 40% of all Android handsets last quarter. So that still leaves 60% of the market to other vendors, right? Yes, but according to Gartner none of these other vendors make up more than 10% of Android volume. None.

In terms of handset brands, Samsung is also now the #1 phone maker in the world, ahead of Nokia.

Nokia may have the #2 position in the market, but we need to remember that most of Nokia's volume is based on the dying Symbian OS. Very little is based on its Windows-powered future at this point. So, considering that we're looking at the death of the dumphone over the next few years, let's look at smartphone vendors and volumes.

Samsung is the #1 player, having shipped 38 million smartphones. Most of these are Android powered, with a smaller number of Bada OS phones.

Here's how smartphone market share looks, by vendor, based on the Gartner data:

These are essentially the top 3 smartphone players right now. I realize that ZTE, LG and Huawei have a larger portion of the mobile market than BlackBerry, but BlackBerry is a pure play on smartphones whereas these three are not. Remember that other Android vendors have less than one quarter of Samsung's volume.

What does this data mean to BlackBerry?

Back in late Feb, I wrote a post about how we'll know if RIM/BlackBerry is successful. In that article I suggested that, as the mobile phone market moves purely to smartphones, BlackBerry could go from 3% market share to over 5%. I said they've got a shot at being the #4 player behind Samsung, Apple and Nokia (not necessarily in that order).

Take a look at what's happening to Nokia. Their Symbian business is falling apart. Sure, they have a Windows Phone strategy, but it's still early days and unclear how much market share it will earn them. What if Windows Phone doesn't stem the bleeding fast enough? Nokia could ultimately drop below RIM's market share. If RIM executes well on BlackBerry 10, they could actually be the #3 mobile phone vendor worldwide.

The Gartner data also reinforces how smart RIM was NOT to take the "easy solution" and adopt Android. So far there is only one winner in the Android camp, and it just so happens to be a Korean giant who controls a good chunk of its own supply chain. Going head to head with Samsung, using the same OS, is a tough battle. And if you chose to compete at the low end, you're fighting the Chinese giants, Huawei and ZTE.

Conclusion: Android is no place to be for RIM.

So RIM has chosen the tough path of BlackBerry 10. And from what we saw at BlackBerry World 2012 earlier this month, it's looking good. They need to ship (or they're toast), but this battle isn't over yet. You can't call it over when Nokia is still the #2 mobile phone company in the world on an aging system like Symbian.

As long as we get a decent quality release of BB10 from RIM this year, I think the company has a very good shot at being the #3 or #4 mobile phone vendor as the adoption of smartphones approaches the vast majority of all mobile phone sales.