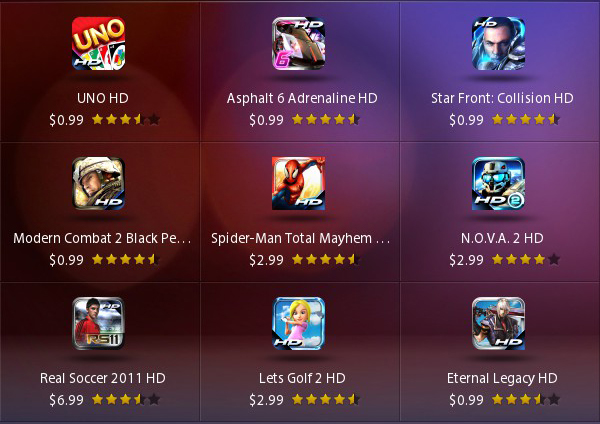 Coinciding with an iOS Chinese New Year promotion, Gameloft now has a bunch of their excellent BlackBerry PlayBook games on sale for $0.99 a pop. These include Asphalt 6, UNO, Star Front: Collision, Modern Combat 2, and Eternal Legacy.

Gameloft started pumping out a bunch of PlayBook titles this fall, and the quality is second only to EA's titles. Even then, sometimes Gameloft is much more open about doing "homages" to other popular games than EA. Asphalt 6 is a good pick if you've already played the preloaded Need for Speed to death. The familiarity of UNO will be a welcome sight for those looking for something a little more casual. I've put some time into Star Front: Collision, and as a guy who had spent a healthy chunk of high school playing StarCraft, it was a great addition to my PlayBook.

Modern Combat 2 is a clear spiritual descendent of the Modern Warfare series on consoles, and it manages to do pretty well, especially with the multiplayer support. I'm still not sold on the control scheme, but I'd be willing to give it another serious shot once the iOS version of Modern Combat 3 gets ported over to the BlackBerry PlayBook Finally, Eternal Legacy is a classic Final Fantasy-style role-playing game, I haven't had the itch to play those kind of games in awhile, but it's great to have the option there.

Gameloft has also slashed prices on a few other games to $2.99, including Spider-man: Total Mayhem, N.O.V.A. 2, and Let's Golf 2. Normally most of Gameloft's PlayBook games go for $6.99, so this is quite the deal - get 'em while they're hot!