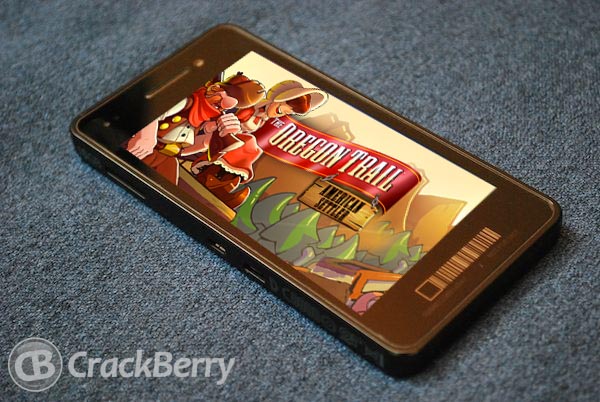 Gameloft is a super popular developer of games for all platforms, including the BlackBerry PlayBook. They have announced that they will be bringing not one or two of their top games to BlackBerry 10 devices, but in fact 11 titles will be available either at launch or soon after.

We are happy to state that with a very organized developer website, and effective debugging tools, the resources provided to us have enabled us to work quickly and efficiently. Thus, as we are set to optimize 11 new titles from Gameloft covering a variety of genres ranging from hardcore to casual, while also boasting the distinctive social integration of Scoreloop and BlackBerry Messenger.

The games are set to be integrated with BlackBerry Messenger and support Scoreloop social gaming tools and multiplayer functions. It's a great thing to see some of the most successful names in mobile gaming committing to BlackBerry 10.  I personally can't wait to play some Oregon Trail and N.O.V.A. 3! Check out the press release below, and let us know what games you're looking forward to on BlackBerry 10 in the comments.

BlackBerry World 2012, Orlando FL and San Francisco, CA - May 1, 2012 – Gameloft, a leading global publisher of digital and social games, is announcing a lineup of 11 games coming to the BlackBerry® 10 platform. The games are being optimized for the new platform using the BlackBerry® 10 Native SDK (software development kit), and include Shark Dash, N.O.V.A. 3: Near Orbit Vanguard Alliance, Ice Age Village and Oregon Trail: American Settler, to name a few.

“We are thrilled to be able to bring some of our most popular titles to the BlackBerry 10 platform,” said Ludovic Blondel, Vice President of OEM at Gameloft. “BlackBerry 10 customers can look forward to enjoying a slew of high-quality games of all genres , including the tremendously successful Shark Dash and Ice Age Village, with an improved gaming experience all around.”

“The BlackBerry 10 platform allows game developers to deliver a high performance mobile gaming experience for customers,” said Martyn Mallick, Vice President Global Alliances & Business Development at RIM. “We have a long and productive relationship with Gameloft and we are pleased to work with them to bring a number of their most popular games to BlackBerry 10 customers at launch.”

The games are designed to take advantage of key BlackBerry 10 features including the Scoreloop social gaming tools and multiplayer functions, and will range from freemium to $6.99 per app. Shark Dash, N.O.V.A. 3: Near Orbit Vanguard Alliance, Ice Age Village and Oregon Trail: American Settler will be available on BlackBerry App World™ at launch, with more games to follow.

About Gameloft
A leading global publisher of digital and social games, Gameloft® has established itself as one of the top innovators in its field since 2000. Gameloft creates games for all digital platforms, including mobile phones, smartphones and tablets (including Apple® iOS and Android® devices), set-top boxes, connected TVs and consoles. Gameloft partners with leading international brands such as UNO®, Spider-Man®, James Cameron’s Avatar™, Ferrari® and Sonic Unleashed®. Gameloft also operates its own established franchises, such as Real Football, Asphalt™, Modern Combat 3: Fallen Nation and N.O.V.A. 3: Near Orbit Vanguard Alliance®. Gameloft is present on all continents, distributes its games in 100 countries and employs over 4,500 developers.