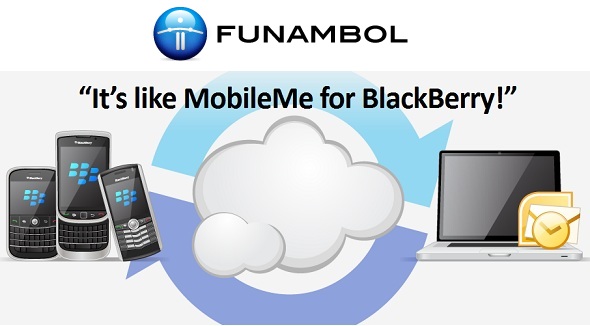 There is a growing need for wireless synchronization. Besides the obvious solution that goes by the name of BES (and the free BES Express), many companies have thrown their hat into the ring to provide users a way to feed that need. Some offer only contact, calendar and email synchronization, others offer only access to files. Today, the folks at Funambol decided to toss their own hat in and announced their beta for a ‘mobile cloud service’ for BlackBerry. Through Funambol BlackBerry service, you are able to sync pictures between your BlackBerry to your PC – or to numerous social networking sites (Facebook, Flicker, etc). You can also enjoy two-way synchronization with Outlook of contacts, calendar, tasks and note. All of this is done OTA and you can choose whether you want to manually sync or schedule automatic syncing.

Funambol is already up and running on other platforms and it’s about time that BlackBerry is shown some love as well. They say that their service is equivalent to what Android would expect from Google or what iPhone users get with MobileMe. Funambol is currently in beta and can be found in BlackBerry App World. Based on the reviews on BlackBerry App World, it’s been there since at least October. Full Press Release after the jump

REDWOOD CITY, Calif., February 3, 2011 – Funambol, the open source mobile cloud company, today launched a mobile cloud service that wirelessly syncs a BlackBerry with a PC and Outlook®, and it allows users to upload pictures to social networks and photo sites. The service is available in 'beta mode' via BlackBerry App World™ or at http://www.mm4bb.com. Wireless sync of BlackBerry PIM data has previously only been available to enterprise customers using dedicated software and hardware. Funambol provides the missing link for BlackBerry consumer users to wirelessly sync pictures and for business users to sync key data with Outlook, even without Exchange. The Funambol BlackBerry service syncs contacts, calendars, tasks, notes and pictures on a BlackBerry with the cloud. Once in the cloud, PIM data (e.g. contacts and calendars) can be automatically synced with Outlook. Device photos can be synced with popular cloud services such as Facebook, Flickr® and Picasa™ as well as a PC. The Funambol service is designed to support the BlackBerry PlayBook tablet once it becomes available. Funambol already supports iPad and Android tablets.

The service is based on the award-winning myFUNAMBOL Portal and provides beta users with a nominal amount of free cloud storage, sufficient for the wireless sync needs of most users. Plans are underway to provide additional storage space. Users will be able to access a premium service from either Funambol itself or a wireless service provider.\

"Connected devices are flooding the market - handsets, tablets and cloud services are essential for people to wirelessly sync core data like contacts, calendars and pictures," said Amit Chawla, Funambol CEO. "iPhone has MobileMe, Android has Google but until now, BlackBerry hasn't had an equivalent service. Funambol is delivering the missing link by giving BlackBerry consumer users a simple way to sync pictures to the cloud and PCs, and prosumers a way to sync contacts, calendars and more with Outlook, without Exchange or cables.”

He added: “The service offers a wide range of features, including wireless back up of data and content for BlackBerry devices on the cloud. It allows BlackBerry users to stay in sync with the apps and cloud-based services they use every day, such as Outlook, Facebook, Flickr and Picasa." "The ability to wirelessly sync contacts, calendars and pictures between BlackBerry devices, Outlook and the cloud, without Exchange and BES, has truly been a missing link," said J. Gerry Purdy, Ph.D., Principal Analyst at MobileTrax. "The Funambol mobile cloud service will be highly beneficial for BlackBerry users."

The Funambol BlackBerry service provides numerous benefits, including automated cloud backup of PIM data and pictures, Outlook PIM sync with BlackBerry devices (without Exchange), and an easy way to move contacts and calendars from other phones and systems onto a new BlackBerry (called "onboarding" in the industry). For example, the service lets users of other mobile devices, such as iPhone, Android and Symbian, easily migrate contacts and other data to BlackBerrys (as well as with other devices). The service also includes a ‘time machine’-like (data backup) feature that allows users to recover mistakenly deleted data.