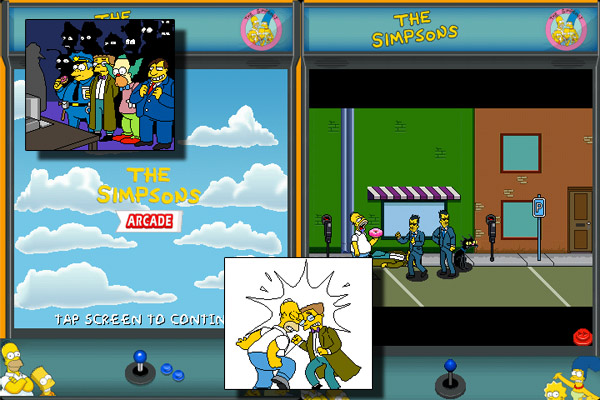 For some of you, The Simpsons have been around since before you were born. Me though, I remember watching those earliest episodes on the fledgling Fox Network, available in only a handful of cities at the time. If you didn't turn the antenna just right, you got mostly static. Since those early days, I've watched all 485 episodes. Yes, that's nearly a half-thousand episodes.

As you may have guessed, The Simpsons Arcade stars Homer, Marge, Maggie, Lisa, and Bart. Homer battles his way through Springfield. There's something about a doughnut and secret plans... The game is amusingly non-specific. The Simpsons Arcade is a Street Fighter-style game with basic controls and one button for kicking, punching, head-butting, etc. Had this simplistic game used any other characters, it wouldn't have been nearly as fun.  Still, it has its enjoyable moments.

Battles with anonymous thugs are made more interesting by special power-ups that let the Simpsons come to Homer's rescue. Bart rides on Homer's shoulder, firing his slingshot at the thugs. Lisa skips rope through the screen, obliterating all enemies in her path.

The Boss characters are certainly more difficult, but not impossible to beat. After all, this is just a fun little mobile game. Again, it is the characters in the game that make it that way. Pulling a cowering Mayor "Diamond" Joe Quimby from the trunk of his limo, fighting the Squeaky-Voiced Teenager at the pizza restaurant. It just makes me laugh. I've only gotten so far in the game, but I suspect later levels may include dogs, or bees, or the dogs with bees in their mouths and when they bark they shoot bees at you.

The game is supported on many devices, running OS 4.2 and higher, including the Torch. Playing this on a touchscreen took a little practice, and I'm still not great at it. My thumb keeps getting in the way. D'oh! Since movement and fighting are both controlled with the touchscreen, I find it a little hard to get in the rhythm of swiping to move and tapping to fight.

Priced at 99 cents for a limited time, The Simpsons Arcade is a fun time with my favorite yellow family. With tons of characters showing up all the time, I'm never quite sure who will be next. And so, when you ask me: What did I think of the game? Let's just say it moved me... To a bigger house! Oh crap, I said the loud part quiet and the quiet part loud. (Thanks, Ryan)