Front Runner! That bastion of good and righteousness in the galaxy! With guns blazing, this indefatigable hero blasts into the galaxy striving to put right what once went wrong, and hoping each time that his next leap, will be the leap home. Okay, no. Front Runner is simply a dude in a spaceship. One day, Red Ivan - that scourge of the galaxy - shows up, and our hero decides that enough is enough.

There are many enemies to defeat in Front Runner, and they come at you in waves. Some shoot missiles, some shoot energy rings, other crawl along the walls of the screen AND shoot energy rings. In first few missions, this really isn't a big problem. Later missions and the game's endless mode will certainly challenge even the most dexterous of players. As you play through the game's bosses - Red Ivan, the Electric Twins, and Dizzy and Daisy - you'll get their weapons. By the time you reach endless mode, you'll have a main gun that fires in 4 directions, missiles that home in on enemies, an electric blast for those that get too close, and the ferocious loyalty of Daisy.

All these weapons are put to the test in Endless Mode. There, you play until you die. And you will die many, many times. Each time I play though, I make it a little further. Of course, the game makes it a little harder too. The last time I died, I think I had three Red Ivans and two Electric Twins on the screen, I had just defeated a Dizzy, and there was all manner of insanity on my screen.

If you're in the mood for a fun shoot-em-up game set in space, I heartily recommend Front Runner. More screenshots after the break. 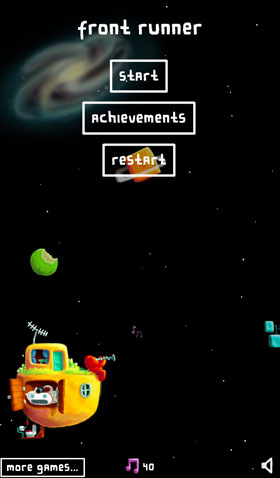