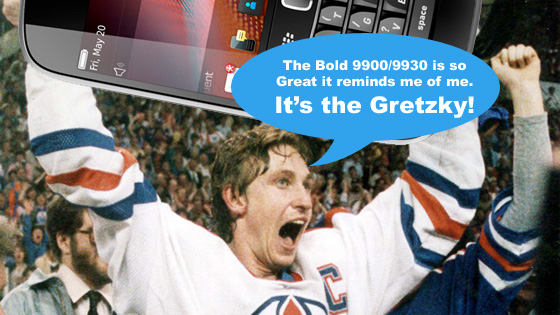 We recorded a CrackBerry Podcast earlier today, talking about all of the newly-announced BlackBerry 7 Smartphones. It's a fun show, so be sure to listen. But by the end of it, we realized we NEEDED to come up with some shorter nicknames for this next generation of BlackBerry Smartphones. Ater sixty minutes of CrackBerry talk tossing back names like Bold 9900, Bold 9930, Torch 9850, Torch 9860 and Torch 9810 we were getting tongue tied and parched lips. Back in June I wrote a ranty editorial titled Can we just call it the BlackBerry Bold Touch already? This Bold 9900 / Bold 9930 thing is driving me crazy! which highlighed my annoyance that in order to address the new Bolds in a technically correct way, I could never just say Bold 9900 (as that ignores it's CDMA counterpart the 9930). Oh if only there were a unique way to identify both devices in one sentence, life would be grand.

With the Bold Touch or Touch Bold sounding a bit too much like a bad porno, I've tried to let that name slip from my vocabulary. But on today's podcast we managed to wrangle up a fitting name for the Bold 9900 / Bold 9930... the GRETZKY! Think about it. Gretzy was #99 (9900), Canadian (BlackBerry is from Canada), RIM loves hockey (remember Jim Balsillie wanted to buy an NHL team) and Gretzky is the Great One, just as the Bold 9900/9930 is the greatest of the traditional BlackBerrys to date. So there ya have it... if you want a good, short and fitting nickname that encompasses the Bold 9900 and Bold 9930, just refer to the new Bolds as the Gretzky.

So if you're going to hit the bar this weekend and the topic of RIM's new BlackBerry Smartphones comes up, make things easy and talk about the Gretzky, the ten, and the fiddy sixty. Have any better nicknames for these new BBs? Drop em in the comments!