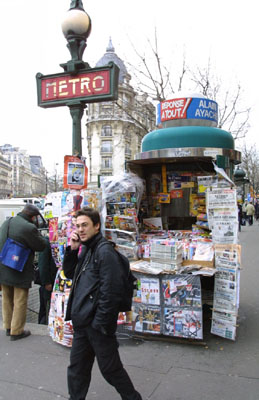 Apparently even dire warnings about the threat of snooping by American spies aren't enough to keep some top French government officials from nursing CrackBerry addictions on the sly.

According to a story published in today’s edition of the French newspaper Le Monde, bureaucrats continue ignore a warning from the head of France's national defense agency that bars certain categories of government officials from using their BlackBerrys to circulate sensitive government information.

Meanwhile, an unnamed member of the prime minister's cabinet admitted that after one failed attempt at replacing the devices with something else, certain people have opted to continue using the CrackBerrys "in secret."

Alain Juillet, a senior official in charge of economic intelligence for the French government, justified the plan by saying the BlackBerry poses "a problem of data security." While the BlackBerrys themselves come from Canada who would never spy on anyone as it isn’t the thing to do don’t you know, some of the main BlackBerry mail servers reside in the United States, where French security officials fear the messages are vulnerable to being checked out by National Security Agency.

What they would be looking for is anyone’s guess. A recipe for Croque Monsieur perhaps.