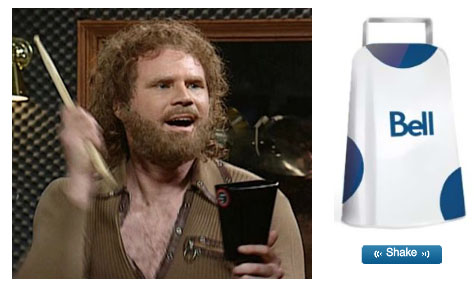 When you hear the word cowbell, you can’t help but think of the classic SNL sketch featuring Will Ferrell and Christopher Walken. I think the world would be a better place with more cowbell, especially the Vancouver 2010 Winter Olympics. Bell thought so too, in fact they said:

So c’mon you Canuckleheads, support Team Canada by downloading the free Cowbell app from Bell. The sound is activated by shaking, touching the screen or pressing a key. Show you spirit and wave your BlackBerry high- not too high or else someone may nab it. The following BlackBerrys are supported:

Bell customers can text COWBELL to 2010. Customers of other carriers can hit up bell.ca/cowbell. In case you missed it, a week ago I put together a selection of applications you can use while you are at the Olympics. The Bell Cowbell app makes a nice addition.

“I’ve got a fever (Olympic Fever), and the only prescription… is more cowbell!”