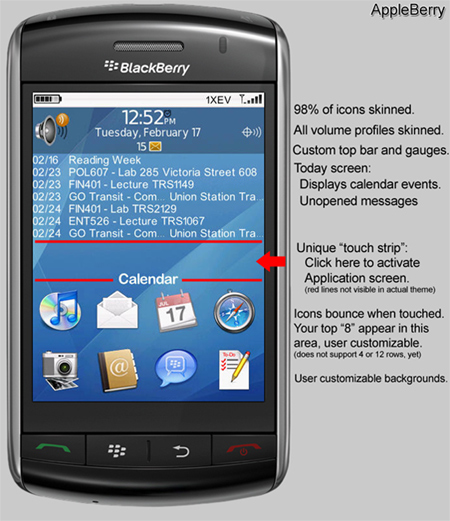 Nearly a week ago to the hour, a beta for the Plazmic Content Developer's Kit (CDK) version 4.7 leaked out on the net. Though it's an early beta and there are some known bugs, that hasn't stopped BlackBerry theme developers from going crazy on pumping out Storm and Curve 8900 themes, which have had a massively pent up demand. Just take a quick gander at the Storm themes forum to see how much it has grown in a week!

One free theme in particular has caught the attention of the CrackBerry community, with the action on the accompanying forum thread rivaling that of a leaked Storm OS! CrackBerry.com member hastings has created the AppleBerry theme for the BlackBerry Storm. There tends to be a love or hate opinion on themes that are based on another device's OS (be it mobile OS or desktop OS), but regardless of that opinion the AppleBerry theme is SLICK. I installed it on my Storm and have been thoroughly impressed. Pretty much everything has been re-skinned, I love the message/calendar preview on the homescreen and "touch strip" is clever. On the homescreen, clicking in the empty area above the eight shortcuts (the "touch strip") takes you to the Application screen.

For more images, info and to download, head on over to AppleBerry forum thread.