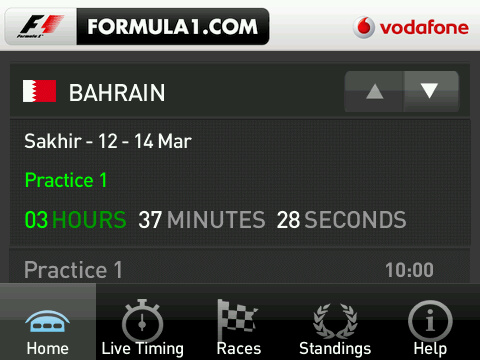 WooHOoo! We're literally just hours away from the official start of the 2010 Formula 1 season with the first Friday Practice about to kick off in Bahrain. And to make this year's practice sessions, qualifying and races even more engaging to watch on tv BlackBerry owners can now download the Official Formula1.com Live Timing App and follow the lap details from their device. Features include:

To download, just visit mobile.formula1.com from your BlackBerry's web browser. The app is free of charge, but you will need to register at formula1.com to take advantage of the app all season long (you can use the app for one race weekend without having to register). At 1.1 megabytes it's a fairly heavy app by BlackBerry standards (I'm sure F1 fans won't mind!), but from the few minutes I've spent on it so far it seems to be a well-built app. The true test will come once the cars hit the track though.

As for the 2010 season, I think we're in for a good one. Some of the rule changes are a bit wonky but should hopefully make for better race action. And with Michael Schumacher back in the sport (albeit not in a Ferrari) and with some very competitive team driver pairings, there's going to be a lot of drama and action both on and off the track. Any picks on who wins this year? Sound off in the comments! I already have my race ticket and trip booked to hit up the Grand Prix of Canada in Montreal in June, so if you're going to be there let me know and we'll do a CrackBerry/F1 Fan Meetup! Enjoy the app, and enjoy the season!