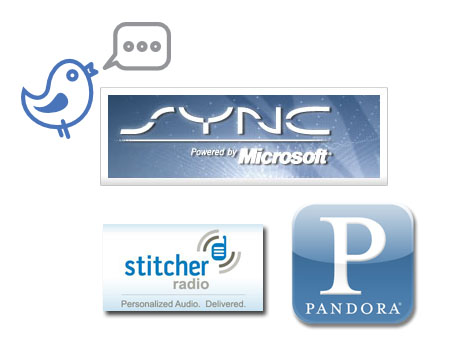 Ford announced today partnerships with Pandora, Stitcher and OpenBeak that will allow for voice control via SYNC enabled vehicles. The new system will allow users to control their internet radio and update Twitter with steering wheel controls and voice commands. The SYNC-enabled applications will be available "through the same app store interfaces consumers currently use" ie. BlackBerry App World.

"To use OpenBeak, Pandora or Stitcher in the car right now, drivers have to take their eyes off the road and manually control the device," explained VanDagens. "Recent research shows that activity that draws drivers' eyes off the road substantially increases the risk of accidents. By allowing drivers to control the app through SYNC's voice commands and steering wheel buttons, we can hopefully reduce distraction for millions of drivers wanting to enjoy these apps during their commutes."

No exact date has been set for when the features will be available, but it should be sometime later this year. A SYNC SDK will be rolled out as well, allowing developers to modify and create mobile applications to work with the system. Check out the full press release after the jump.

"SYNC's open platform approach is unique in the industry and allows us to capitalize on the ever-improving capabilities of mobile devices," said Doug VanDagens, director of Ford Connected Services Solutions Organization. "Smartphone mobile apps are experiencing explosive growth, and consumers are becoming dependent on them for news, entertainment and information, so we're excited to be working with some of the most popular apps on the market, OpenBeak, Pandora and Stitcher, to showcase the potential of the SYNC API."

The SYNC API is being created in conjunction with a related software development kit (SDK) and associated hardware that will include a Ford radio head and related SYNC components configured to operate outside of the vehicle. The entire package is planned for broader rollout later this year and will allow developers to modify existing mobile applications and create all-new apps that can interface with Ford's popular SYNC voice-activated in-car communications system.

By enabling developers to integrate the SYNC API into their apps, Ford is providing customers with the capability to access the applications they use most while in the car. Leveraging SYNC's safer voice commands and steering wheel controls, drivers are able to keep their hands on the wheel and eyes on the road. Using an open API model allows Ford to leverage the mobile device as an operating system and processor, while using SYNC to access the vehicle controls.

"To use OpenBeak, Pandora or Stitcher in the car right now, drivers have to take their eyes off the road and manually control the device," explained VanDagens. "Recent research shows that activity that draws drivers' eyes off the road substantially increases the risk of accidents. By allowing drivers to control the app through SYNC's voice commands and steering wheel buttons, we can hopefully reduce distraction for millions of drivers wanting to enjoy these apps during their commutes."

Ford is joining millions of customers in embracing the app marketplace. Studies show what was a nonexistent niche just three years ago is expected to blossom into a $4 billion industry by 2012. The App Store, run by Apple, is one of dozens of application marketplaces and already boasts more than 100,000 mobile apps and more than 2 billion downloads.

Similar sites serving other mobile operating systems, such as Android and BlackBerry®, have experienced the same explosive growth. Analysts predict the mobile device will become the No. 1 source for Internet access by 2020, surpassing the home computer. Ford and SYNC will answer the consumer demand by offering the only platform available for drivers to safely manage their mobile applications.

Customers will be able to download SYNC-enabled mobile apps through the same app store interfaces consumers currently use. As SYNC-enabled versions of existing apps are released into the app stores, users will be prompted to download the latest version upon connection. Also, as developers grasp the notion that the vehicle interior has opened to them, a new dimension of apps designed from the outset to maximize the unique in-car environment will follow.

OpenBeak
OpenBeak is a mobile client for posting updates and reading messages on Twitter. It works over the data network, so users don't need to use Short Message Service from their mobile phones. OpenBeak is the evolution of the original Twitter app for BlackBerry smartphones, TwitterBerry, which was launched in 2007. OpenBeak reflects the app's expansion beyond its original functionality.

The SYNC application will take the Twitter experience to a whole new level, with safety while interacting in the vehicle as the main goal. Timelines, direct messages and friends can be read out loud. While listening to a particular tweet, the display indicates the user and elapsed time since the tweet was written. Also planned is the capability to retweet a post, be notified when new messages are received or tweets appear in a user's timeline and, upon startup, present the total number of new tweets. Steering wheel controls will skip to the next tweet or go back to the previous item in the timeline.

Pandora
With more than 40 million users, Pandora is the most popular Internet radio service in the world. Users simply enter a favorite song or artist into Pandora and the app quickly creates personalized radio stations, based on that musical style. The use of Pandora's thumb up/thumb down feature allows listeners to further curate their stations and enjoy a stream of great music, perfectly suited to their taste - new and old, well known and obscure.

Pandora's mobile audience, 17 million strong and growing rapidly, is ripe for the SYNC application, which will allow them to further extend their listening into the car. With the SYNC-enabled Pandora app, listeners can use vehicle controls to pause and skip songs, and use voice commands to thumb up or down songs, switch between Pandora stations, or create a new station from a currently playing artist or song.

Stitcher
Focusing on the mobile market, Stitcher allows listeners to create personalized, on-demand Internet radio stations with news, talk and entertainment programming. Within the Stitcher app, users choose the programs they want "stitched" together, and the app then streams that content to the user's mobile device. Stitcher also will recommend new programs that come online if they match with the types of programs the user already has chosen.

Since its release in 2008, Stitcher has received numerous awards including a People's Choice Webby award for mobile news, a Best of '09 award from San Francisco magazine and a PC Mag Top 10 App of 2009.

"We're really encouraged by the rapid development time and positive feedback we've seen from our first partners," said VanDagens. "Getting app functionality inside the vehicle, controllable through vehicle interfaces, will be huge for customer convenience and for helping drivers complete their tasks while keeping their hands on the wheel and eyes on the road."