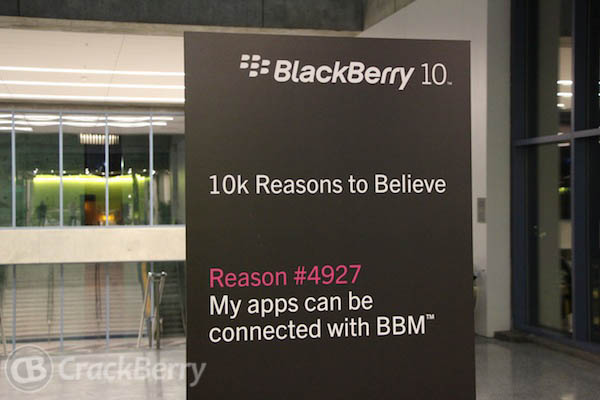 It's now a little over a week since BlackBerry Jam Americas. RIM's stock price closed on Friday at $8.22, which is up from $6.37 the morning of Thorsten's keynote in San Jose last Tuesday. That's a 30% improvement in only a few short days.

Why is the stock up so much, and is it justified? That's a trick question because, from where I sit, it's fruitless to try to predict short term stock movements. Sure, RIM looked like a stock that had been overly punished. But if their market share keeps sliding we'll look back at $6.37 and realize that even that was overpriced. And if they recover to the degree that we all hope with a strong launch of BlackBerry 10, even today's $8+ stock price will seem cheap in retrospect.

But short term? It's anyone's guess.

That said, let's look at some of the positive developments from last week in terms of how they might help build RIM's overall road to recovery.

RIM says that its BlackBerry 10 developer tools are now "API complete", meaning that developers have access to all of the necessary application programming interfaces to build great apps. This is good, however a quick read of the BlackBerry devblog guest posts shows that many developers are still confused as to which environment they should be working in. An environment like iOS provides far less choice, and perhaps as a result, far less confusion among developers. Is RIM giving developers too many options? What are your thoughts?

RIM also showed us a few big names of who will be in the app store. Cisco on the enterprise side, Facebook, FourSquare, and others. This is great. But I still think the app store will be a work in progress for some time. RIM is improving, but they won't match the breadth of apps available on iOS anytime soon. I say this a lot, but it's true: RIM needs to to show the big names in entertainment (think Netflix) and communication (think Skype).

Oracle had some good news to share about RIM last week. Oracle's OpenWorld conference featured a presentation by CEO Larry Ellison. He showed how RIM isn't far behind Android and iOS in terms of people using these devices to post updates to Twitter. Ellison reportedly quipped, "If I was an investor, I might buy a little bit of that RIM stock."

I doubt Ellison meant to be dishing out investing advice, but it's nice to see evidence that RIM is still a heavyweight when it comes to its customers making use of devices for social purposes. The BlackBerry platform has always been powerful for social networking. BlackBerry 10 will only make this more true.

RIM also released its latest financial results last week. The most important news? RIM is still growing its subscriber base (by over 10% per year). This sparked some financial analysts, such as Richard Tse from Cormark Securities in Toronto, to upgrade the stock. This is the first time in a while that I've seen any analyst upgrade RIM because of some aspect of business performance, not just because the stock seemed too cheap.

Competitively speaking, RIM is also clearly in the running for the #3 platform spot. Microsoft is working hard, but they haven't publicly released the SDK for Windows Phone 8 yet. It's only been released to "select developers", and won't be available to the rest of the world until later this year. The way I see it, RIM has a head start with BlackBerry 10 on the app development front. The tools are out now, and earlier tools have been around for much longer. RIM has a larger base of users and developers for its mobile platform. Microsoft has more money though - which is important, and can't be forgotten. This story will become more clear soon. Microsoft is set to reveal Windows Phone 8 on October 29th, and it's rumored we could see devices like the Lumia 920 on AT&T as early as November 4th.

The risks to the RIM story remain. They're doing $1 billion in quarterly revenue relating to system access fees (SAF) paid by carriers. This will come under pressure even more than it is already. RIM isn't making money on its hardware today, and will need to boost ASP (and see strong sales) of BlackBerry 10 devices to call this a financial turnaround.

They'll also have to earn great reviews of the new platform when it hits the market. Will people love the new touch screen keyboard? Only time will tell. I will point out, however, that executives who have conducted demonstrations of the keyboard don't seem to type very fast on it. Why is that? Lack of use? Is it as good as they've hyped it up to be?

Lastly, here's a friendly reminder not to take executives too seriously when they talk up their own story. Thorsten Heins has been saying, at every opportunity, that carriers are excited about BlackBerry 10. Whenever you hear any executive speak simply ask yourself if he or she would ever publicly say the opposite. If the answer is "no" then chances are you shouldn't place much value on the comment. In this case, I'm happy to hear that carriers are excited about BlackBerry 10. It makes sense that carriers will want to support RIM and the launch of BlackBerry 10. But actions by these carriers speak louder than the vendor's words.