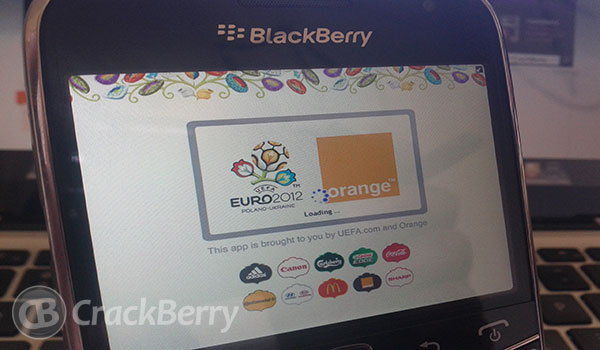 I am not as big a football fan as I used to be while growing up but I do end up following big football events like the World Cup and Euro Championships. The event starts in three days and is being held in Poland and Ukraine. UEFA and Orange have partnered together to bring you an official app to follow Euro 2012.

The app is free and brings you live results, news, photos and standings during the Euro Championships. You also have the ability to mark teams as favourite and then set up push notifications to alert you when they're playing. There are other alerts you can set too, including goals, videos and match events like subs, and yellow and red card alerts. What's more it looks like it gives the match times in local time so you can be sure to be ready for kick-off on time.

If you are going to be following the Euro Championships it certainly looks to be a useful app to download. It is available for BlackBerry devices with OS 5.0 and above and is only supported in some European countries including the U.K, Spain and France. For the full list check out the App World page.