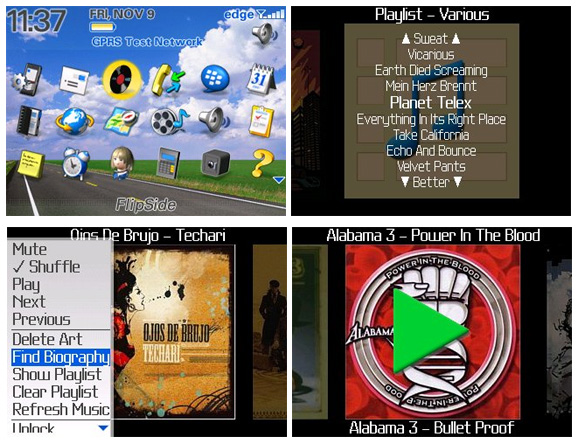 Update: I couldn't resist..I had to try it. Downloaded it and it rocks! Definitely a few things to tweak up before this is "officially released", but worth getting your hands on it now while it's free! Read through the comments for all sorts of details.

I just received an email from Haemish over at Electric Pocket letting me know about a new MP3 player they're working on for the BlackBerry. Normally I'd give it a download and quick try before posting, but since the Smartphone Round Robin has me going berry-less I'm going to post it up "blind" and you can tell me in the comments what you think of it so far (keep in mind it's beta, which means it will get better!).

So if you're feeling like taking on a bit of risk today, you can point your BlackBerry to http://flipside.fm/flipside.jad to download the beta of FlipSide. You can find more screenshots here if you want to get a better idea what it's all about. And remember, I take no responsibility if it doesn't workout (there's likely to be a bug or two). If you want to report a bug or suggest a feature for FlipSide, Haemish says to please join their Yahoo group ... AND... the top posters will receive a free copy of FlipSide once the trial is over.

Haemish also passed on these 5 handy hints for using FlipSide:

Is it good, great, or still some bugs to work out? Post your feedback in the comments!