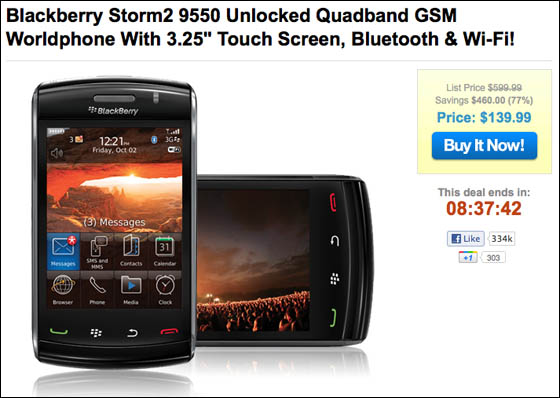 BlackBerry OS 5.0 had just been released, BlackBerry App World was still in its infancy, and we had our first device (the BlackBerry Curve 8520/30) with a trackpad instead of that dirty old trackball.

Research In Motion was trying to recover from the initial BlackBerry Storm, and launched the BlackBerry Storm2 in an effort to redeem themselves. Was it a successful attempt? You can judge that for yourself, since just a bit over two years later, none of the latest devices carry the Storm name.

In any case, the device does have a following - mostly made up of people that for one reason or another have stuck with it since launch. You can still buy the BlackBerry Storm2, and deals like this one at 1SaleADay pop up from time to time. So, whether you try to impress your friends with your retro style when you pull this bad boy out of your pocket, give it to the dog as a chew toy, or use it as a backup device in case of emergency, for just $140 you won't have to mortgage the house to own it. Don't delay, the sale ends in a few hours.