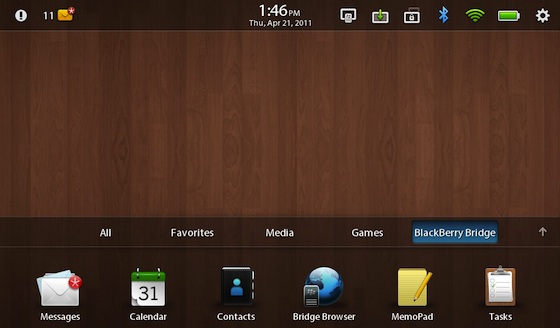 I've had a few days now to play around with BlackBerry Bridge on my PlayBook, and I have to say I do love the functionality. Granted it's not perfect (yet) but for the most part it does get the job done. While the obvious lack of BBM is a big issue at the moment, I am still hopefully that we'll see it (along with other apps) in the near future. I do have some gripes thus far -- some are big ones and some may just be "wishful thinking" -- that could stand to make BlackBerry Bridge a much better overall expierience for BlackBerry users. So keep reading for my short list of five improvements that could make BlackBerry Bridge better.

Messages are a BlackBerry users bread and butter. We need them. We love them. So having them available on the PlayBook via BlackBerry Bridge is great -- but not being able to manage them properly is not. Right now when an email comes to my device I get an alert on my PlayBook and can open the messages app (when Bridged) to check it out. What I don't like is that the way things are set up now, you get multiple notifications in pretty much the same place. The exclamation notifier (for lack of a better term) and messages notifier on the PlayBook both let you know that you have a message. I do like that I can tap them to get a dropdown with a quick list of the messages, but what I don't like is that you can't really clear the exclamation notifier unless you actually read the messages. Ideally you would think after you recognized the message (entered the messages app or tapped the icon) the messages would not be "new" and the notifier would go away, but that's not the case. The notification stays until you read the messages. I did try clearing it out by tapping the "x" on the dropdown, but that just marks the items as read even if I didn't get to them -- not fun.

Also, when it comes to actually reading messages in the app, I don't really like how the highlight sits on the first message. If the first message is something you'd like to leave unread, you need to mark it as such or highlight a different message. I think some kind of landing spot like the menu bar would be a better option in this case. So I think a little reworking of how messages are handled is definitely in order.

Oh and change the Messages icon - BlackBerry users recognize the red star as being a new notification, so having it on the icon all the time just confuses us - so lose it.

I typically don't like to complain much and I'm a pretty patient guy, but I'm fairly sure one of the big selling points of the PlayBook and Bridge was BBM. So ah ... where the heck is it??

We've got messages, tasks, memos, calendar and contacts, so why not other apps as well? Aside from the obvious in BlackBerry Messenger, how about SMS for starters? That one should be a no-brainer. Messages already works fairly well, so just toss in SMS and call it a day. The next step would be things like Password Keeper. This is already a tightly knit app on my phone, and having access to it on my PlayBook would be huge. Last but certainly not least would be access to the phone itself. The caller-id function is already there, so being that the PlayBook has both speakers and a microphone, why can't we use the PlayBook as a phone as well? We're not talking video chat or anything here (that's a whole other issue for another, much longer post).

Twitter and other 3rd party apps also come to mind on this topic. Why not integrate these as well? If I read my Twitter timeline on my PlayBook, let me leave off somewhere in my timeline and have things update on my phone as well. Doesn't seem like too much to ask.

Also -- integrate BlackBerry Bridge with the rest of the OS on the PlayBook. Let me have an opttion to email photos via Bridge right in the photos app. Have email links in the browser open Messages when Bridged. It seems like Bridge and the rest of the OS are still two separate entities and that shouldn't really be the case.

4. Give Us Some Options

Right now Bridge is pretty much as-is. You can't really tweak anything, so if you don't like one aspect, you're just stuck with it. The main reason this one brewed up was within the Messages app. I use a password on my phone, thus I have to use a password to get to my messages on the PlayBook. This wasn't bad at first, but quickly became annoying. I was hoping there was some kind of option to disable the password on the PlayBook but no such luck. The only was to not have to enter it to check my messages would be to not use it on my phone. How about an option to kill the password on the PlayBook? I mean if I'm Bridged I'm obviously by the PlayBook (or at least know where it is) so I do I really need to enter my password? I'm all about security but I think some better options in this case would make things much easier.

I'd like to be able to tweak other things as well. On my phone I have plenty of options to get things just how I like them. Be it how I view my messages or calendar, sound settings, notifications or whatever. Let me tweak this bad boy the way I want to. Having no options is not an option.

I get Bridge. I like Bridge. But PLEASE -- make it work all the time. Sooo many users had trouble getting Bridge up and running (myself included - AT&T debacle aside) and it just seems like the "easy" steps to get going should actually work -- and they should keep working. I don't want to have to worry about waking up and having Bridge disconnected with no idea of what happened or how to get it going again. After using it I can almost say that I rely on it to work now, so having it crap out for no reason can't happen. So please, make Bridge work all the time.

So what are your thoughts? Do you agree? Disagree? Let us know what you think in the comments, then head into the PlayBook forums for more discussion.