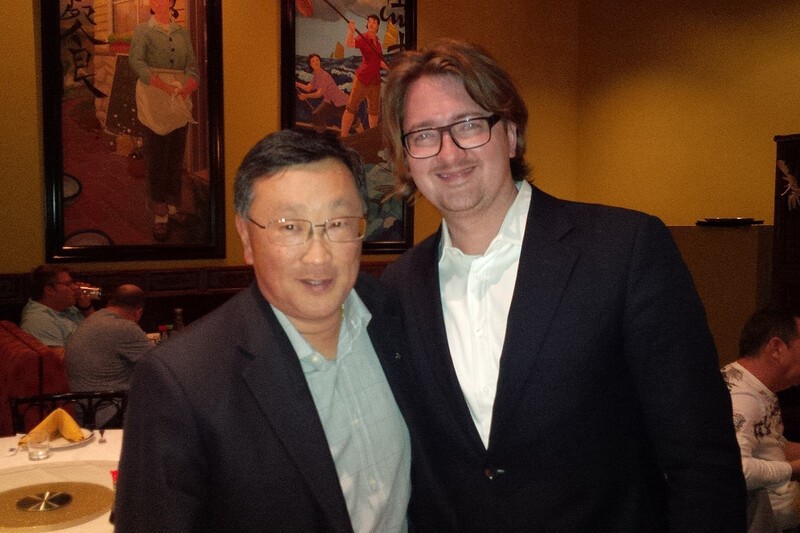 BlackBerry didn’t have a big booth on display at CES last week, but that doesn’t mean the company sat out the biggest tech event of the year. The BBM team was there spreading the word of BBM 2.0 which will soon land on iOS, Android and, of course, BlackBerry. QNX also was there, showing off its latest hotness for use in automotive consoles and displays. And, perhaps most important, BlackBerry’s new CEO John Chen was there.

In back-to-back meetings all week, Chen worked in some time to speak to the media, including an exclusive lunch date with CrackBerry. Unfortunately, the desert dryness had the better of my voice, so I wasn’t quite my usual chatty self. It was all good though, with Mobile Nations' Marcus Adolfsson joining as my wingman — between the three of us we had a very productive conversation and an enjoyable meal.

Because we tag-teamed the lunch, I decided Marcus and I should also tag-team the followup articles. Be sure to read Marcus’ interview with Chen, which does a great job of capturing the on-the-record discussion from our lunch date and goes into a lot of detail on BlackBerry’s near-term strategy going forward. As for this follow-up article, I’m going to focus on what wasn’t said.

Keep reading for my key takeaways from our discussion.

1. John Chen has a very good idea of what loyal BlackBerry users want.

How do I know this? Because we used this opportunity to tell him. And he listened. When I first interviewed John on the phone just over two months ago, I had just 15 minutes to ask questions, and at that point he was on the job for less than 24 hours. I’m not even sure at that point if he had visited CrackBerry more than a time or two.

Now meeting face to face and with more time on the clock, we expressed to John what we see are the biggest pain points for today's “enthusiast” BlackBerry smartphone users and what we believe the vast majority of us would like to see happen in the months ahead. John’s strategy for BlackBerry of course goes far beyond just the hardcore user, but it was great to have the chance to give us our list of wants directly.

2. There’s no magic bullet in the near-term strategy, and there are going to be different strategies in different markets.

In 2011 and 2012, we looked forward to 2013 as BlackBerry’s turnaround year. The launch of the BlackBerry 10 platform and release of BlackBerry 10 phones would be the singular event that would get things back on track for BlackBerry. It wasn’t crazy to expect this strategy would work. With more than 70 million existing users, just getting a decent portion of the existing user base to upgrade to BlackBerry 10 phones the first year would be a big boost to the company. Even during our interview with John, he expressed that he truly believes that the phone business is like the movie business, where you’re only one hit away from being great again.

The phone business is like the movie business, where you’re only one hit away from being great again

With the big BlackBerry 10 bullet fired in 2013 and not hitting its target, John Chen’s strategy for 2014 is more akin to firing a machine gun. There are going to be lots of bullets fired, at a lot of targets. No single thing is simply going to kill it and make all the difference to BlackBerry.

And while the launch of BlackBerry 10 was very much a global rollout — one strategy for the entire world — Chen knows he doesn’t have the ammunition to do that right now. Expect to see in different strategies for different markets. For example, in the U.S. it’s no surprise that carrier support for BlackBerry is waning (or almost non-existent). Here he can not rely on the U.S. carriers as much and instead go straight to enterprise and government customers with a direct sales team. In other emerging markets, where BlackBerry is still doing well and the carrier support is there, he can push phone sales hard throughout 2014 and beyond.

It’s not a straightforward path, and the marketing message will have to be done in a very smart way to educate customers in a way that’s not confusing. Bottom line, BlackBerry will operate in every market. Just don’t expect to see BlackBerry doing the same thing everywhere you look.

3. Looking at BlackBerry as a portfolio of businesses will allow BlackBerry to work on its marketing message and turnaround the negative cloud of sentiment that has become synonymous with the company.

Announced during BlackBerry’s recent earnings report, one of John’s first big changes has been a reorganization of the company around four distinct business units: enterprise services, devices, messaging and QNX.

John went into a lot of detail about this during lunch and spoke about the benefit of this repackaging for investors (read our John Chen interview for full details). Each of these business units within BlackBerry is in a different stage of development, at a different stage of profitability, and with its own unique set of competitors, challenges and opportunities. Talking about BlackBerry as a portfolio of businesses allows the company to tell its story more accurately to investors.

The realization I walked away with from lunch was that this strategy is also going to help BlackBerry clear the cloud of negative sentiment that has been lingering over the BlackBerry name for the past few years. Still, today, when you start talking about phones and the name BlackBerry comes up, the average person immediately pictures a BlackBerry phone (and more likely than not, one with a keyboard). It’s no surprise. Selling phones has always been what BlackBerry has been about. For years and years, every decision made at BlackBerry was based around the question, how does this help us sell more BlackBerry phones? The company wanted you to hear BlackBerry and think about its phones.

With BlackBerry pivoting from being a vertically integrated solution (to use BlackBerry services like BES or BBM you had to own a BlackBerry phone, too) into a horizontal provider (BES and BBM supporting multiple mobile platforms), the company is quickly changing the way it makes decisions internally.

On the flip side, the company now has to start changing its market message so consumers better understand the changes the company is going through. John reiterated that he has to go to work on his marketing message, and that’s something he really wants to see happen.

I really believe this notion of BlackBerry as a portfolio of businesses approach could go a long way in helping to turn around the negative sentiment with mainstream consumers, as this story gets messaged properly to them. Word-of-mouth is super powerful, and people repeat what they read in the media. In 2012, when people would say “BlackBerry is dead,” you could at least tell them about BlackBerry 10 coming to save the day. With the launch of BlackBerry 10 not being as successful on a sales standpoint as we all hoped, it has become really difficult to counter the “BlackBerry is dead” message. If you hear BlackBerry and think just about phones, and the phone sales are not happening, it’s difficult to argue.

Though it’s essentially a repackaging of what’s already is there, with this change in thinking John Chen has given us a story to tell that makes a lot of sense.

4. John Chen will absolutely make the changes necessary to execute on his strategy.

When Thorsten Heins stepped out of his BlackBerry COO shoes and into his BlackBerry CEO ones, the business strategy was already set. He had to bring BlackBerry 10 to market. Given where the company was at, the amount of work that had already been put into it and was left to do, he really had no choice but to stay the course and focus 100 percent on getting that done. He definitely had the ability to influence this strategy — he brought in a new CMO and COO to help market BB10 and get it built — but given the timing he wasn’t about to pivot on big strategy until BlackBerry 10 was launched. Looking back, perhaps the biggest strategic changes Heins made were behind the scenes. Speaking to lots of employees over the past year and half, it’s clear Heins greatly improved the culture at BlackBerry from the Jim Balsillie/Mike Lazaridis era. This is quite a feat if you consider how badly BlackBerry was being beaten up, and that Heins was downsizing and restructuring the company during his reign.

He clearly has the drive to make BlackBerry succeed, but he doesn’t have the protectionist vanity that can come with being the one that founded the company

In contrast, John Chen has stepped into the BlackBerry CEO role from the outside. He has no BlackBerry baggage to carry with him. And he’s stepping in at a time where literally many years of hard work have been completed — there is now a new platform in market to sell and build on top of. BlackBerry 10 is here. And it’s clear clear that Chen will make whatever changes he feels necessary to turn BlackBerry around.

Talking to Chen, I feel like no idea or strategic pivot is out of bounds, as long as it makes sense and he thinks it’s the right thing to advance BlackBerry as a company. He clearly has the drive to make BlackBerry succeed, but he doesn’t have the protectionist vanity that can come with being the one that founded the company. This is a big difference to Mike and Jim’s Research In Motion, where for years they made a lot of strategic decisions that just seemed, well, stubborn. BlackBerry was their company and they ran it the way they wanted to. And because they had been very successful, they really felt their ideas were always best because they were their ideas. I felt this way of decision-making began to disappear in the Heins era, but Heins was really executing on the strategy that Mike and Jim put in place while they were still there. This is JC’s BlackBerry now. There’s no baggage. No ego. He’s going to make whatever changes are necessary to get it done.

5. He’s smart enough to know what he doesn’t know.

Clearly, John Chen is one smart cookie. You don’t walk into a position like this if you’re not. What scares me about smart people sometimes is when they’re too smart and they think they have all the answers about all the things.

Thankfully, Chen knows where he needs to surround himself with people smarter than him. For example, on the handset front he spoke very highly of Ron Louks, recently appointed by Chen to take over leadership of the devices business.

Speaking to Chen helped to alleviate one of my biggest BlackBerry concerns of late, which is a loss of talent. I know a lot of smart people who have left BlackBerry over the past couple of years to go work for “the competition.” And with BlackBerry being pretty badly beaten up these past couple of years, I assumed it might be difficult to recruit top talent. Without talent, it doesn’t matter how good your strategy is — you won’t be able to execute it.

Chen has no worries over this though. There are still a lot of smart people at BlackBerry, and recruiting top talent isn’t an issue. In reality, a beaten up company can be very attractive for the best people to head to. Think about it. Share prices for BlackBerry are extremely low. If you get in there, get your shares and help turn things around, there’s a lot of room for growth.

Hell, it almost makes me want to apply.