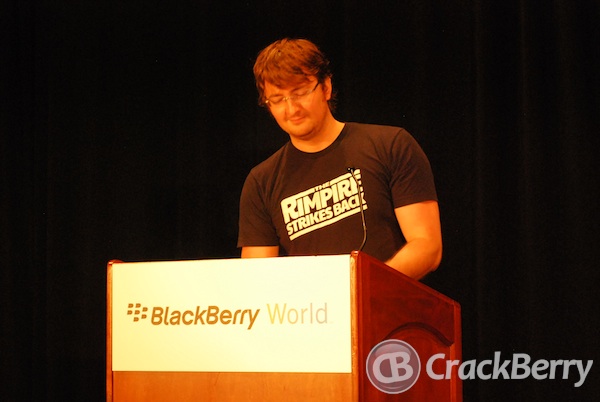 With BlackBerry World 2012 officially behind us, it's time to look back at the event that I believe will go down as a historic turning point in RIM's history. There's a lot to take in, so I'll keep the intro short and let's get right to it. Keep reading for what I view are five important observations coming out of the event.

1. This is clearly a new Research In Motion.

I have been to every major BlackBerry event since 2007. I know a lot of RIM people. The RIM I witnessed at BlackBerry World 2012 and the BlackBerry 10 Jam was very different.

CEO Thorsten Heins has wasted no time since taking the reigns of RIM three months ago to reorganize and reenergize the company. Speaking to numerous RIM employees throughout the week, including Heins himself, it was clear this is a company that now has its act together.

During his session with the press, Heins even made note that morale is up at RIM. This seems like it would be unlikely given the challenges RIM is facing, but Heins noted this has been accomplished by bringing clear direction to the company and assigning accountability throughout. Compared to  the RIM of old, each individual now knows exactly what their responsibilities are and how they are contributing to the organizational goals. Morale drops with uncertainty. That uncertainty is gone. Heins is even holding regular global town hall meetings via webcast with the entire company to rally the troops and keep everybody informed of what is going on.

Honestly, attending BlackBerry DevCon America in October 2011 was depressing. It felt like maybe I really was witnessing a RIM that was bleeding to death and near giving up. The RIM I witnessed at BlackBerry World 2012 was the polar opposite. This is a company on a mission. I didn't see doubt or fear or resignation. I witnessed a company that is fighting back.

As an outside observer, I can only surmise that the catalyst for this massive change was the appointment of Thorsten Heins as CEO. Witnessing what has changed in only three months, I can't help but wonder where BlackBerry would be today if Mike and Jim would have stepped down and put Heins in place two years ago.

2. BlackBerry finally knows who their customer is, and BlackBerry 10 is for them.

RIM has come back to its roots and finally decided who their customer is. BlackBerry is for success. RIM is not going to try to out Apple Apple. They're not building a phone for four year olds or 84 year olds. RIM is building a phone that puts the priority on people who have sh!t to do and need to get it done.

Not everybody is going to love BlackBerry 10. And that's OK. Not everybody needs to. Remember, the term "smartphone" is going to die. It's only a matter of time before all phones are smart. BlackBerry is and will be competing in a global phone market. By carving out a niche that appeals to the world's "producers" (And I'm using that term the way Ayn Rand would in Atlas Shrugged), RIM can build a sustainable business in mobile computing. If BlackBerry 10 only appeals to 1 in 5 in a global market of 2 billion + phone owners, that's still a BIG business.

Don't think this means BlackBerry 10 will be a boring enterprise device. It won't be. Yes, it'll excel as a communication tool and will not lose sight of things like security, but it will also have an awesome app experience, and rock as a gaming platform and casual use device. The big thing is that BlackBerry got their priorities straight. They're not sacrificing speed of use for the things you do 80% of the time when a phone is in your hand. Looking back to CrackBerry Kevin's Hierarchy of Needs, BlackBerry 10 has a real shot at delivering that no-compromise mobile experience I've been waiting on for years (I'm super stoked to see a touchscreen UI that is designed for one-handed navigation).

I talked to BES admins from several HUGE companies, and they're all either trialing or deploying Mobile Fusion. The guys I spoke to who worked for large multinational corporations talked about the power RIM has in terms of their global support. Not a lot of companies in the space can deliver 24/7 support around the world the way RIM can. Bring Your Own Device to work is now a reality, so enterprises need to support all platforms, but RIM clearly can still be a big service provider here (side note - all of these guys HATE the thought of Android in the workplace).

Even when posing questions to individuals representing carriers, it's clear that they want to see BlackBerry succeed as well. The US market will be a challenge RIM will need to work extremely hard on, but globally there is still a lot of love for the BlackBerry brand and there will be no shortage of hero device launches around the world for BlackBerry 10.

Bottom line, RIM needs to deliver BlackBerry 10 phones to the market that people want to buy, but behind the scenes the necessary support in the mobile ecosystem is there.

4. Wall Street has its own agenda and a lot of the media doesn't care to get things right.

As our in-house analyst Chris Umiastowski wrote previously, RIM's drop in value this week is not a reflection of what we saw at BlackBerry World 2012. This was the best BlackBerry event we have ever attended. It's clear that finally RIM gets it and is doing something about it. Yes, they have challenges ahead still -- the same challenges they had before BlackBerry World kicked off -- yet we see a double digit percentage decline in stock price over the course of the week.

The rationale is pretty simple. Wall Street wants to see a big play happen; an aquisition or major partnership announcement. RIM has said before they are looking at all possibilities, but it's clear to us that RIM wants to bring BlackBerry 10 to market and rebuild the BlackBerry brand (in the markets where it's fallen) on their own. I still believe RIM can do it, and want to see them pull it off.

Honestly, if a business event has to take place, I'd rather see private equity come in to take Research In Motion private vs. some sort of M&A deal or partnership with another big company. It would afford RIM the ability to work without the constant scrutiny (and of course when things are rocking and rolling they can IPO again for a big pay day for all involved). But that's a topic for another editorial.

On the media front, it's becoming all too clear who gets it, and who doesn't. The New York Times showed how little they care about accurate tech reporting this week, with one of the worst articles I have seen in a while. As we stated in our rebuttal, we're fine with seeing negative opinions on BlackBerry that are justified - people are entitled to their opinions. But seeing facts get so badly misreported is just pure laziness. And yes, they did update their article.

The media sentiment against BlackBerry won't change over night, but Thorsten Heins' willingness to engage with the media won over a lot of journalists and bloggers at BlackBerry World. RIM still needs to deliver good news for the media to report on, but at least a genuine relationship with the media will hopefully get more media outlets caring to at least get the story right.

Everybody loves a comeback story. BlackBerry has taken a beating over the past 18 months, by consumers, by the media and by Wall Street. I can't predict the future, but I do know that if things go the way I hope they will, and we see a successful launch of BlackBerry 10 on the market, we will look back at BlackBerry World 2012 and the BlackBerry 10 Jam as a pivotal turning point that got RIM and the BlackBerry brand back on track.

You can feel a groundswell of support for BlackBerry. Those in attendance felt it. You can see it on CrackBerry - in our forums and in the blogs. And maybe more importantly, you can see it elsewhere around the web. On tech sites where I normally see RIM bashing in the comments, I'm seeing way more positive indicators - BlackBerry is starting to get its cool back. It won't happen overnight. But it's coming.

Let's Rock And Roll This!

On RIM's end, it all comes down to execution. They know what they need to do and they have to get it done. For us, we have to keep waiting... and you know what Tom Petty said, the waiting is the hardest part. But we'll get through it CrackBerry Nation. BlackBerry 10 will be worth the wait!