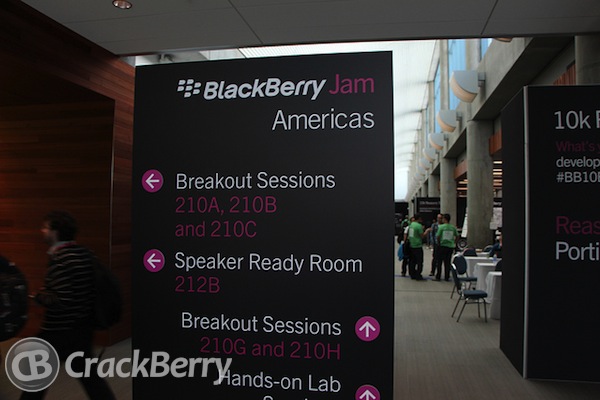 [ Editor's Note: This post was written by Mike Maguire. Mike was one of the lucky winners who obtained their pass to BlackBerry Jam Americas through CrackBerry's giveaway. Thanks Mike! ]

It was really exciting to see my name as a contest winner. I have to really give thanks to the gang at CrackBerry and RIM for believing in me. When I got my passport three hours before my flight, I knew it was going to be an adventure. It was, and one of the best experiences I've ever had.

There was quite a buzz going into the BlackBerry Jam Americas keynote, and there were a lot of things shown that developers could get excited about. There was a lot, as well, to be stoked about as users. I am not sure which way I am going to develop my application, but I'm happy to see how much RIM is putting into supporting whichever platform developers choose to use. There are so many tools that developers can now use to create. And the sense that BlackBerry is with us all the way. The sessions and events that followed proved it to me again and again.

Everything that the conference represented proved that this is a community that I want to be a part of. And I feel like I am now. I am at the very beginning of developing software, and that I can be successful with creating for BlackBerry. It's an amazing feeling!

I met some great people, enjoyed some tasty beer and learned a lot from the sessions and fellow developers. And I will continue to learn, and carry with me the positivity that I felt this past week. As many in the media have said, it's do or die time for RIM. Luckily, everyone at the conference this week embraced the ethos that BlackBerry people do, and that the successful launch of BlackBerry 10 rests on a company and community hellbent on making sure that happens.

Again, a big thank you to CrackBerry for the conference pass. Thank you to the community for letting me be a part of it. Instead of seeing what happens, let's make it happen!