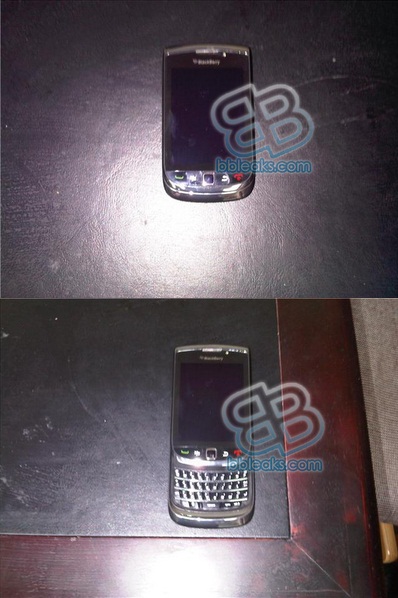 * Update: 12 Hours later... I did up a BlackBerry Slider Rumors Roundup and Update post. BE SURE TO CHECK IT OUT! *

* Update 2 - For those in the comments and voting on the poll who are not fans of this vertical slider design concept, according to the emails we're receiving it's sounding more and more like the hardware in the photos is actually pretty final form and this is what RIM's first BlackBerry Slider will look like. *

* Update - Rejigged the title on this post and clarified the text below a bit (writing in too much of a rush first time around). I don't think it's a scrapped design - there is most-definitely going to be a vertical slider and this could be it.. just making the point this also could be an earlier revision of the hardware so don't judge it as a final product just yet since RIM hasn't announced anything on this yet. These pictures are a bit butch but the BlackBerry Slider should be quite sexy when it comes time for you to actually hold one in your hands :)  *

Let the fun and games begin. BBleaks have posted what appears to be the first real photos of a BlackBerry Smartphone with a vertical slider form factor similar to the Palm Pre. And it sounds like more photos and maybe a video of the device in action are on the way, so we know this isn't a photoshop.

I wouldn't get too judgemental on this particular photo just yet as I'm not convinced this is the exact hardware revision that will hit the market. If you tune into our CrackBerry Podcasts, you'll know that rumors of a vertical-sliding BlackBerry have been around for months and months and months now going back to summer '09 when codenames like "talledega" ("Mr. T" for short) folllowed suit and that RIM is going to announce a vertical slider one of these days. There was talk of a horizontal slider and there was talk of a vertical slider and there has always been talk of a new Storm. Pinning down specifics has been hard but the one thing that has been for certain is that RIM was pumping out and working with a bunch of hardware designs and going through multiple revisions in trying to nail the form factors they were going to push out in their next generation of BlackBerry Smartphones.

Now going back to when we first heard the codename talledaga / Mr. T, the descriptions we heard closely matched what this device looks like from people who handled it and used it at the time (few months back). This is not Storm3. We also heard that the first generation Mr. T hardware was scrapped because it was too thick and too heavy. I think RIM likes the form factor of a vertical slider and they're definitely going to roll out a vertical slider, and in getting to that final product they're going to work through many revisions to make sure they have it right. Remember it wasn't too long ago that the scrapped "magnum" prototype made an appearance in the blogs (to be replaced by the sleeker dakota), and while I'm not certain my BlackBerry intuition is telling me this may be one of the earlier talledega hardware revisions that must have found its way out R&D. I'm sure the latest versions and final product will be similar in nature and design, afterall, the pieces are there - trackpad, full keyboard, touchscreen (NO SurePress we hear - thank god) but it may be just a tad bit sleeker then what these photos are showing off. Or heck, maybe this is just an unflattering photo and the next round of photos will show off it off more sexily. Hopefully more emerge soon so we can get a better handle on it.

We'll do some digging, so stay tuned for more. Posts like this tend to get followed by a lot more details quick. Maybe I'm just judging this photo harshly. I do like the device conceptually. Though part of me thinks this device looks a little expected and safe... and what RIM needs at this stage in the game is to hit a homerun with something really consumer focused that's a little more divergent.

BUT... as for what you see right now folks, what do you think? Yay? Nay? Getting there but not quite? Sound off in the comments!