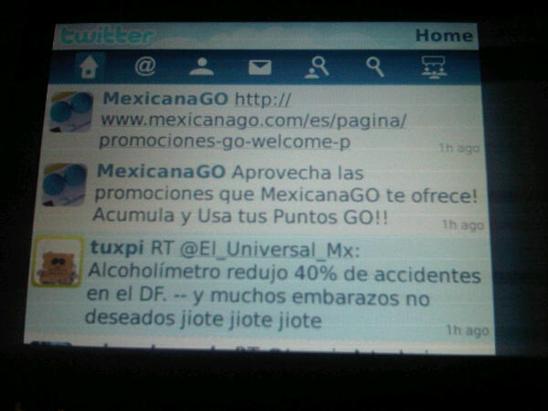 Could this quite possibly be the "Twitter For BlackBerry" client we all have been waiting for? Sure seems that way. While we won't go out and say yes, this is pretty much surely it. It does appear to have all the markings of what we have come to know as Twitter For BlackBerry. The above picture was posted up on Tweetphoto and then to Twitter via @jmatuk. Rumors are again getting out there of a February release for what was once known as project banshee. We heard months ago that it was supposed to launch back at the end of 2009 but was delayed due to it not being ready for primetime and RIM has pushed out many revisions in that time. It seems now that the feature set for the initial release has now been locked down and all that's left is more bug testing and to push it out the door.

The BlackBerry Bold 9700 was launched recently in Mexico on Telcel and @jmatuk states this is where the information is coming from as Twitter for BlackBerry was discussed at the launch event. Take it all as rumor at this point folks but lets hope it's rumor turned fact, come February. I've heard good and bad things about the client. But, until we get to see it and try it on our own we'll not know for sure how it turned out. Some may love it, some may not, just like the many other twitter clients out there.