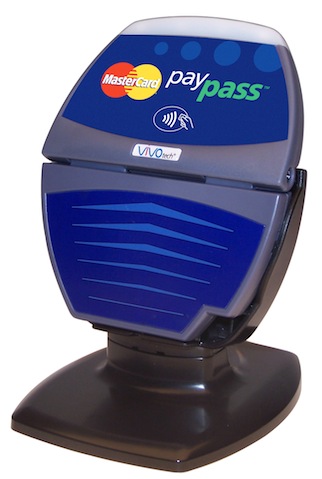 RIM today announced that they're making use of that MasterCard PayPass certification for a near-field communications-enabled mobile wallet in Turkey. The Turkcell BlackBerry Bold 9900 will be spearheading the new contactless payment scheme, though it's easy to imagine the wealth of other NFC BlackBerry devices getting in on the service too - especially the BlackBerry Curve 9360, since it's already certified. Transactions under a certain amount won't need a PIN to be entered, ensuring you can tap and go with ease, but for anything over 35 Turkish Lira (or roughly $20), you'll need to authenticate.

Before getting too cynical about RIM paying attention to everywhere but North America, it's worth noting that Turkey is huge. There are 72 million people there, with 66 million cell phones in use as of 2009. Just to put that in perspective, here in Canada we've got about 24 million mobiles running among 34 million people.

Regardless, it'll be great when PayPass with mobile NFC lands here at home, and BlackBerry can start giving Google Wallet a bit of honest competition.  Keep reading for the full press release.

The power of the BlackBerry Bold 9900 combined with the Turkcell Cep-T Cüzdan application enables Turkcell customers to enjoy making payments in a simple, easy, safe and convenient way by simply tapping their NFC-enabled BlackBerry Bold 9900 against a MasterCard PayPassTM reader in shops, retail outlets, cafes and restaurants across Turkey. In addition, Turkcell customers travelling abroad will also be able make payments in the same way .

Alexandra Zagury, Managing Director, Turkey, RIM said, "We are pleased to partner with Turkcell to launch the first commercially available NFC mobile wallet for BlackBerry smartphone customers in Turkey. RIM is committed to supporting the advancement of NFC technology and today's launch marks an exciting milestone for the future of mobile commerce."

From today, Turkcell's BlackBerry Bold 9900 customers can apply for the Turkcell Cep-T Cüzdan service at Turkcell stores. Customers will be provided with a new NFC-enabled SIM and advised on how to download the Turkcell Cep-T Cüzdan application for free. As part of the registration process the customer's MasterCard details will be securely registered by Turkcell to enable payments of up to 35 TL per transaction with no pin or signature, using their BlackBerry Bold 9900. For payments over 35 TL, pin or signature support is also required.