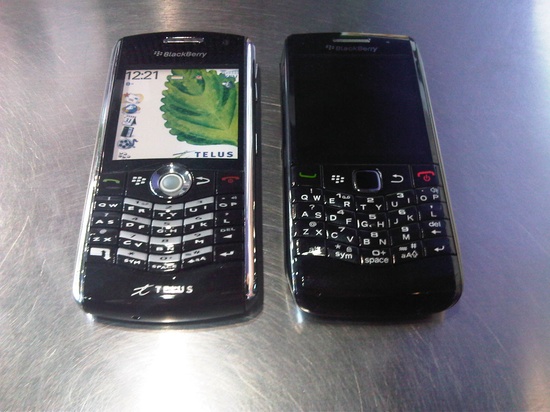 In these photos, the new Pearl is compared to a dummy unit of the Telus BlackBerry Pearl 8130. Though the 8130 is a dummy unit, it's a solid representation and gets the job done. As you can see, at first glance the new and old Pearl are similar in appearance, and then the latest RIM BlackBerry styling from devices like the Storm2 and Bold 9700 jump out at you on the 9100 - trackpad and beveled edges on the glass like the Bold 9700, battery door cover like the Storm2, sliced into a narrow form factor with a fierce looking keyboard.

My big question to everybody.... do you think now that the trackball (the original PEARL) is gone from the device, that the new Pearl needs a more manly name?? Sound off in the comments!