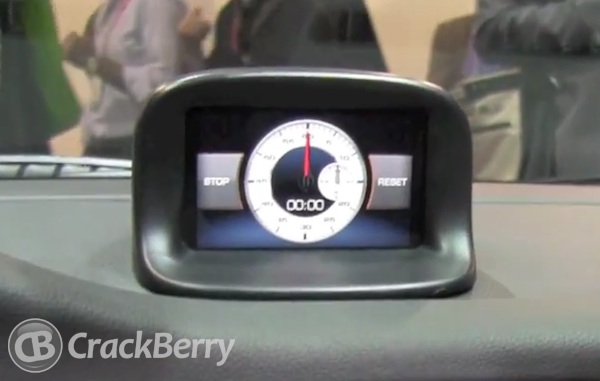 RIM has just announced that they will be giving a limited edition prototype device, BlackBerry Dev 10 Alpha, to developers at BlackBerry Jam in May. Thinking on this a bit and after a quick chat with Kevin (who is working from the beach in Miami today) we realized that we've seen the device live and in color already. Back at CES 2012 we took a tour of the QNX-powered Porsche Concept Car and it had a very interesting display mounted on the dash. A quick holy @#$% moment and we realized that the device in the car is actually BlackBerry 10 Dev Alpha (inside a custom mount on the dash). We knew there was something special about the concept car, and the display on the dash definitely had us thinking. It had such an amazing display (crazy bright and super high res .. like beyond Apple retina. Really.) that it couldn't just be there for looks. Kevin actually swiped the display off camera and it moved just like the PlayBook OS. It was exactly what RIM has said the BlackBerry Dev 10 Alpha will be - not BlackBerry 10 hardware or OS, but more like the PlayBook OS running on a phone-sized device. Our hunch is that this is what the BlackBerry Colt originally was (which we know is no longer a consumer device) but more likely became the internal QNX/BB10 test device.

So what do you think? We'll have to wait a bit to actually get our hands on the device itself, but for now you can check out the QNX Porsche Concept Car video to see more of the BlackBerry 10 Dev Alpha.