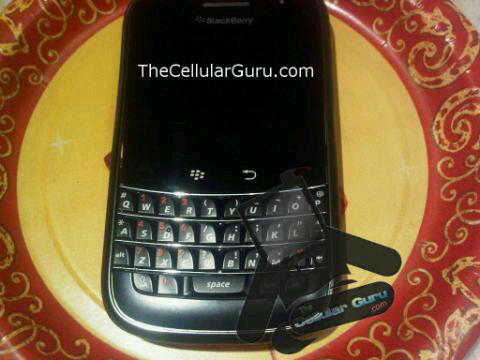 * Update from Kevin: This is DEFINITELY one of the older pre-dakota prototypes (ie. magnum). Don't expect to be buying this exact device anytime soon (errr.. never). But something nicer and updated is in the works! *

We've been hearing the codename "Dakota" for a while now. The Bold 9000 sized, 3G, Touchscreen device with a full QWERTY keyboard that is also rumored to be using a "Liquid Lens" designed for high quality images. And now the above pic appears on Twitter followed by a second, clearer shot. showing off it's trackball / trackpad-less form factor.

Is it a Dakota? Or is it more likely that this is a Magnum prototype? Or some other prototype that got left in the trash can? Magnum was the predecessor to the Dakota, whose design was scrapped and then transitioned into Dakota. No OS details were mentioned from @cellguru, so it remains unknown if there is even an OS loaded onto it, which makes it a little difficult to say with 100% certainty what device it actually is. We were under the impression that Magnum didn't have a trackpad while Dakota did, plus the actual look and styling of this device seems a tad bit older than that of the latest generation of BlackBerry Smartphones. If it is Magnum, then hopefully we'll see some Dakota soon and that'll clarify the situation. That's all we have for now. Feel free to speculate in the comments. Hopefully some more details will turn up soon. In the meantime, what do you all think of the concept? Liking the notion of a BlackBerry that's half touchscreen, half physical keyboard?