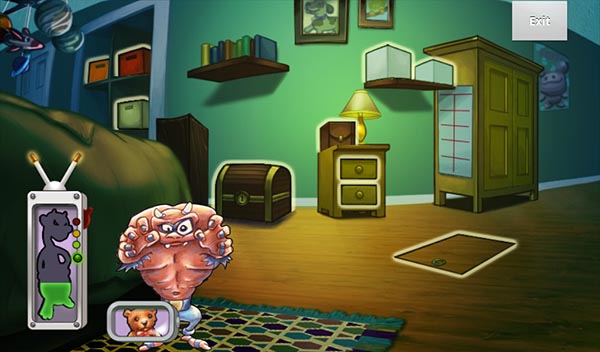 Monster Chase, a new game for the BlackBerry PlayBook by Snowed in Studios, is a fun way that kids can work on their concentration and memory skills as well as improve their cognitive ability. What kid wouldn't find scaring monsters away with toys fun?

The game is simple to play so it works for lots of different age levels (including adults). All you have to do to scare the monster away is find the toy that is shown in the box. The toys are hidden all around the room inside different objects. You can open the boxes and doors simply by tapping on them, but remember where they're at! Every wrong guess adds to the Monster Meter and after three incorrect tries, another monster appears.

Monster Chase is toted to be a game for kids but I find myself playing it almost as much as my five year old. I like that I can turn both the sounds and music off for those nights when I can't sleep and need something to do as well as being able to just turn the music off for when Payten wants to play (she says it's too spooky). It does seem to take a while for the game to open but after that, it plays just fine. Some reviews say that the PlayBook screen's responsiveness lags for them but that wasn't the case for me.

Monster Chase is available in BlackBerry App World for only $0.99. There is also a Lite (FREE) version which only has one game mode and no multiplayer.