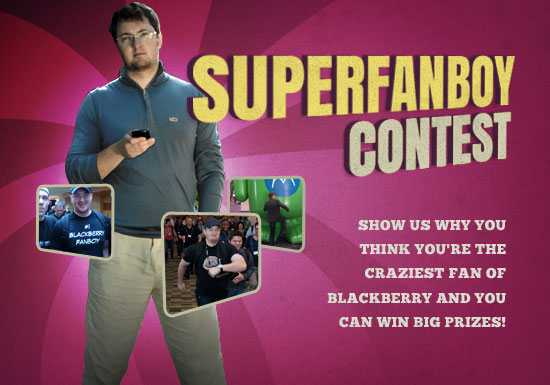 Ok CrackBerry Nation, listen up! We've been running a bunch of contests on CrackBerry lately, giving readers the chance to win free BlackBerry 7 Smartphones. But winning these contests has largely come down to lady luck. That being the case, I've been receiving a bunch of requests from our loyal readers and members to run a contest where it's less about luck and more about passion, creativity and a bit of hard work. So here it is. CrackBerry presents the BlackBerry Super Fanboy (& Fangirl) Contest!

Following our EPIC video contests of the past, like what the What Would You Do for a BlackBerry Storm? and I Love My BlackBerry contests, this is a VIDEO contest. To enter for your chance to win, you're going to have to put in the time and effort to create a video proving your BlackBerry fanboyism. Yes, it's harder than leaving a comment to a blog post for a chance to win, but the odds will be in your favor and the prize for winning this contest will make it sooo worth the effort. Full contest details are below, so keep reading. The timing on this one is a little tight, so you don't want to waste time... get thinking and make your video! This is going to be a fun one!!

GRAND PRIZE: A trip to San Francisco to attend the BlackBerry Developer Conference (October 18th to 20th - includes airfare for up to two individuals*, 3 Nights Stay at the Marriott Conference Hotel and 2 BlackBerry DevCon event passes and dinner out one night with the CrackBerry team); a BlackBerry PlayBook + BlackBerry 7 Smartphone of choice; $100 BlackBerry Accessories from ShopCrackBerry.com and a CrackBerry Kevin custom designed BlackBerry Super FanBoy T-Shirt!

Make a video that proves beyond a doubt that you are the ultimate BlackBerry Super Fan.

We're leaving how you accomplish this pretty much wide open. Some ideas that came to our minds... Make a funny commercial showing off the merits of BlackBerry vs. the competition. Get a wicked BlackBerry for Life tattoo and record the whole process. Write a BlackBerry song and perform it with a crew of BlackBerry dancers. We suggest checking out some of the finalist entries from our past video contests - you'll want to do something original and awesome!

Get Creative! We're looking to be entertained here - make us laugh, make us cry, make us go WOW. We want to watch the video and think to ourselves.... wow, this person really loves BlackBerry... they're totally a BlackBerry Super Fan!

Other than that, we're leaving it wide open for you to get creative!

From the entries submitted, our initial judging panel will narrow the entry selection down to our top finalists (likely top ten or five, depending on the number of entries we receive and how hard it is to separate the best from the rest).

Each finalist video will receive its own individual blog post on the CrackBerry blogs and the CrackBerry community will have a chance to provide their feedback on the videos in the comments to each respective entry. Once all of the finalist videos have been posted, we'll run a summary post recapping all of the finalist videos, along with a poll to allow readers to vote and let the final judging panel know who their favorite is. The final judging panel will take the community votes into account when selecting the winners, but the final decision will come down to the judging panel (we don't want to see it turn into a contest for recruiting voters or trying to game online polling systems).

All said and done, we plan to announce the winner as early as possible the week of October 10th, if not sooner.

The timeline for booking the winner's trip will be a little tight to the BlackBerry DevCon event, so if you're making a video and aiming to win, be sure to plan on keeping October 17th to 20th available for the trip.

Other Details and Fine Print - if you're entering the contest, READ THIS!