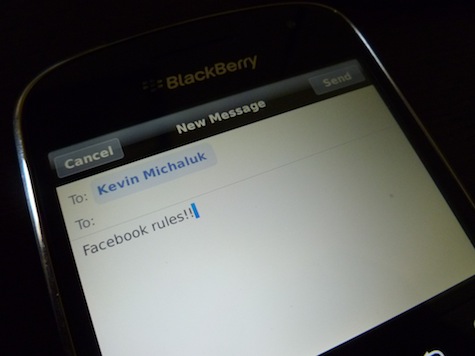 With its no frills layout, there isn't much to getting to know in Facebook Messenger. You have a few options you might tweak (like showing messages in your BlackBerry inbox), but overall you should be able to get the hang of it in no time. You can send messages or view received messages all in one place.

The main screen shows off your inbox of Facebook messages - click to view the message thread or the Compose icon to start a new message.

From here you can view and send messages -- Plain and simple.

Choose to show your messages in your BlackBerry Inbox. New messages show here (as well as banner notification). If you are logged in at your PC the messages will appear here but show as read - so no worries on double notifications.

Obviously there isn't much to it but overall I dig Facebook Messenger. I have quite a few friends I exchange messages with over Facebook often, so having an app just for that purpose really comes in handy. I'm a huge fan of the way it syncs when I'm at my PC as well. I still get my audible alert and LED, but I don't have to worry about viewing the message on my device as it will get marked as ready as soon as I check the message in my chat window on my computer -- very cool stuff.

So if you're having issues with Facebook for BlackBerry, or just hate the app but still want the message functions, check out Facebook Messenger. It's totally free and a breeze to use. Hit the link below for more.