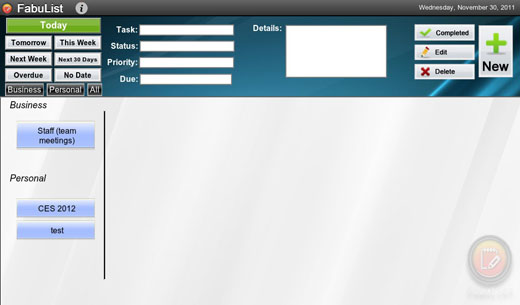 When I first took a look at FabuList by StandAlone Mobile Applications one of the predominant points of discussion was its initial appearance. I'm not going to get into specifics but many of you expressed your issues with the look and feel of the application. Well the developer responded by unveiling v2.0 which revamps the GUI with an easier on the eyes design. Functionality remains the same: it's still a single screen to-do application to record all your notes or just dot down important mental reminders so you can map and plan out what needs to get done without scrolling through menus.

FabuList runs smooth and has the potential to grow with continued user feedback. You can grab this app from BlackBerry App World for just $4.99.