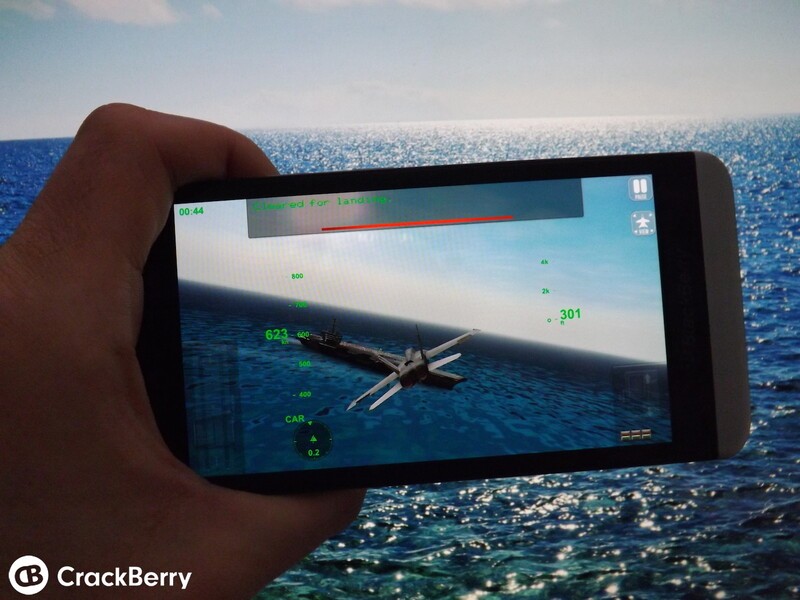 For Z10 and Z30 owners running BlackBerry 10.2.1 you may be interested to hear that one of my all time favorite games is now available to download - F18 Carrier Landing Lite. It's the Android version, hence the 10.2.1 part, but it works perfectly and is totally awesome if simulator games are your thing.

With this being the 'Lite' version of the game it is of course free. I've previously played the full edition both on Android and iOS and for me it's kept me entertained for hours. As well as the great feeling of just flying the F18 fighter jet around there are a bunch of variations within the game.

For starters - you can choose the scenario and with the free edition you have a choice of three - Rectangles, Forest Islands and Canyon. You can also alter the weather conditions to make things as challenging as you like. If you fancy making things a little harder you can change the time of day you fly, the wind speed, amount of clouds, fog and also the height of the cloud cover. As you start each game you'll be given the opportunity to calibrate your device which is always handy for when playing in different places. Clearly laying down in bed is going to need changing from when playing sitting up.

Although the game is called Carrier Landing there's plenty more variation to be had. You can choose if you want to start by taking off from the carrier, start on the approach, perform an airbase landing or an airbase takeoff. These options are all accessible in the 'lite' version although the paid edition does offer up a couple more.

When it comes to flying you've got three options in terms of how you view your plane. Up at the top right of the display is a camera icon. Tap this and you'll be able to switch between views.

Controlling your aircraft if pretty simple once you get the hang of it. There are training modes if you need them but the essentially you have a throttle on the left of the display and your landing gear switch on the right. Moving the plane up/down/left and right is done via tilting your BlackBerry - and it feels real good.

Depending on which camera mode you are using will depict the way you see the HUD (Head Up Display). Either way, you will have your airspeed on the left and your altitude on the right. There is also a small electronic map which will show you the direction you need to fly and also your distance from the target.

When landing you'll need to practice a bit to get things right - particularly on the aircraft carrier. If you're going too fast the runway won't be long enough, and too slow may see you ditch into the sea. Half the fun is getting acquainted with the game if you ask me.

If this one looks like your cup of tea, give it a go. I'm confident you won't find a better, free, flight sim out there. It can get quite addictive though, but that's a good thing right?

If you need assistance on how to get Android apps onto your BlackBerry 10 smartphone hit up the link below. If you already know what your doing, jump into the Snap app and grab F18.

More information on how to install Android apps on BlackBerry 10.2.1