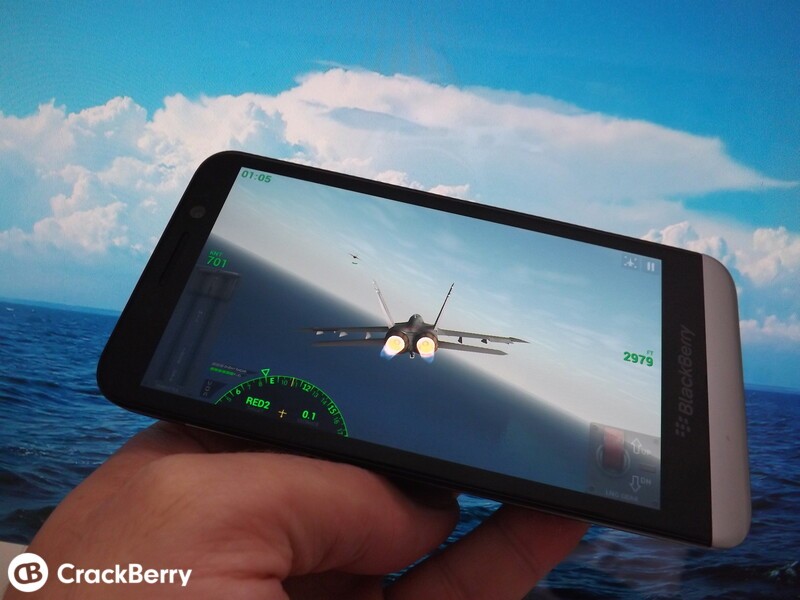 Back in February this year (2014) we told you that you could install the Android version of F18 Carrier Landing on your BlackBerry 10 device, which has long been a firm favorite of mine on other platforms. While I was hanging around in the Amazon Appstore I noticed the sequel available to download which I had to check out.

Like the original - F18 Carrier Landing 2 is a free download, although there is also a 'Pro' version if you fancy it. The free edition clearly has some limitations but if you want to get the hang of the game and have some fun, this is the way.

If a flight simulator game is your kind of thing it doesn't get much better than this. To begin, and if you didn't try the original, there is a very in-depth tutorial, which gets you to grips with all the controls and camera angles available. You can skip this if you want and jump straight into the missions and I can only imagine that this is the ultimate way of experiencing flying a combat jet on your BlackBerry.

Using tilt controls, and on-screen tabs for your throttle and landing gear, you get a wide variation of missions available. You'll be tasked with following another jet to a location, flying to air bases and also aircraft carriers plus more and you'll have a mapping system in your armoury to assist you.

One of the best features in my opinion with this one is all the different camera views you have the option to fly with. You can be outside the aircraft, inside with a full cockpit, or inside with just a HUD (Head Up Display). Which you will prefer will come down to personal choice but I'd urge you to give this one a go - it's truly awesome!

Loving it as much as me? Let us know your thoughts in the comments as I'm sure there will initially be some complaints about it being an Android game.