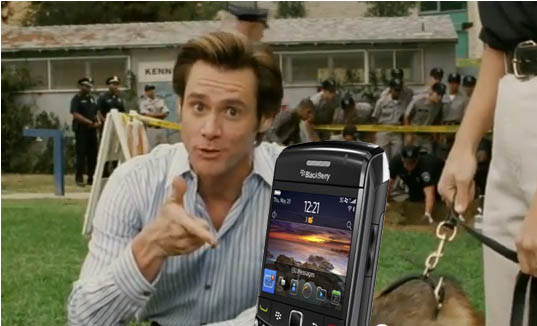 The movie Bruce Almighty was on TV recently; a 2003 comedy where a frustrated field reporter was lent the powers of the big G for a week. During the film, Bruce used his newfound powers to become “Mr. Exclusive” – being the first, and the only, reporter on the scene at major news that he himself created. Putting aside the divine powers, it can be argued that almost anyone can become a Mr/Mrs/Miss/Ms Exclusive – with the right tools of course.

The way we access the news is continually changing as mobile technology advances. I don’t know how many times I would catch the news on an application such as Viigo long before I would be able to sit down in front of the six o’clock news. Do you even venture to the newspaper stand to pay for a paper anymore? Why would you when you can read it online for free? The news has come and gone long before the paper hits the stands – the term “hot off the presses” no longer applies. Terms like “trends” and “feeds” have easily replaced it as they better reflect that instantaneous access we have. If you have a smartphone (or dumbphone for that matter) in hand, and you’re on the scene, you could potentially become a mobile reporter.

The reporter in the field isn’t necessarily on the payroll anymore. All it takes is something as simple as a tweet or status update to start getting the word out. The so called story angle now depends on how many are using their phones to relay what they are seeing. The reporter also doubles as the camera man, as they attach images or even record videos and upload them to sites such as Youtube. Your phone is a lot lighter and more portable than anything a TV News cameraman can tote (I’d hate to see them try to put one in their pocket). It also adds a sense of stealth to mobile reporting, as some situations call for discreet note taking and media recording. Out of many examples, let’s touch upon the riots in London and Vancouver. I first learned about both through Twitter and Facebook. Through Twitpics, yfrog and such, the carnage was captured – raw and without bias. This of course led me to look through hundreds of videos on Youtube on my Torch 9800 and my PlayBook. Eventually, we turned on the TV to watch the news; which more often than not share or refer to Twitter or Videos on you tube. What was once the first point of information now almost comes a final touch point. It’s also the images and videos that were obtained that are being used to identify those involved and will hopefully bring them to justice. Social Networking sites have obviously become more than another way to socialize; they’ve become a reliable hub of vital information.

How often have we seen journalists banned from foreign countries to keep the rest of the world in the dark about civil unrest? The media turned to those who were experiencing it first hand; and those who took part in the movements. Time and again, in Libya, Egypt and other, this movement was dubbed the ‘Twitter Revolution”. Now that really proves the amount of power that can be compressed into 140 characters.

Now I should clarify – I by any means do not think that those in the industry of reporting do not do an amazing job. I’m not saying that they do not work (or have to work) as hard as they do – I applaud them for their continued efforts. What I’m saying is the way we access the news has changed. I still look to them as a voice trying to sort out the chaos of information that is more readily accessible, but is often misinterpreted. Some news channels (such as WBRC) often have applications that allow individuals to submit the news as it happens; “Hot of the Presses” may no longer be relevant, but “This Just In” certainly is. The mobile reporter has become a powerful resource for those who deliver the news to the rest of us. If you find yourself in the middle of a story, you make use of the multitude of apps available from BlackBerry App World or our own CrackBerry AppStore. You can also start by looking at the apps listed below.

Has your blog become a source of up to the nanosecond news? Do the mobile masses hang on your every word? Tumblr, which launched almost 4.5 years ago, is home to over 26 million blogs. It’s designed to make it stupidly simple to share practically anything. Tumblr has a BlackBerry application available that lets you upload information to your tumblelog. In the middle of the action, you can update and post media (video, audio and images) to go along with your uncensored, untamed words of wisdom.

More information on the Tumblr app

Twitter is, arguably, the fastest way to get the news out there; of course you can reach more people if you unprotect your tweets. Twitter for BlackBerry is a natural choice for a free Twitter app that is available to anyone using a BlackBerry with OS 4.5 or higher. See news by viewing local or global trends to see what can affect you now or later. Share news by easily uploading media to go along with your breaking tweets.

Depending on the situation, it may not always be safe to be caught with recorded media and text. You need a quick method of uploading information safely and securely; sharing with it with someone who can then retrieve and share what you have obtained. Perhaps making use of Sugar Sync as a news stronghold should be considered. Share folders with others that you trust, so they can manage the content when you can’t. Sometimes all you can do is record and relay without compromising your safety. SugarSync has both free and premium account to choose from.

Sometimes, a single image cannot convey a message as clearly as a video can. What better, and bigger, place is there to upload/download a video to/from than Youtube? If you’re at the scene of an emergency (and making sure someone has called 911 first) you can upload a video of the action before help even arrives. You can also see what's happening around you so you know where you need to be. Check out m.youtube.com from your BlackBerry browser

Sometimes, the action is happening so quickly, you just need to keep up with it. That may mean jotting everything down first and sorting through it later. You spend too much time tweaking what you have and you may end up missing a bigger story. Evernote is a great option to have; as it is easily accessible everywhere. You can note anything you need on the scene, then go back to your desk and go through your findings on your computer. The advanced search options allow you to browse by tags, keywords, titles – even hand written notes.

Consider your BlackBerry armed with the power you need to report the news. Please remember to keep yourself out of harms way; your life is much more valuable that the story. That and you don’t want to end up being the story either. It’s time to hit the streets, so make sure your BlackBerry is fully charged (or at least keep a spare battery in your pocket). I’m Ryan Blundell and that’s the way the cookie crumbles. Back to you.