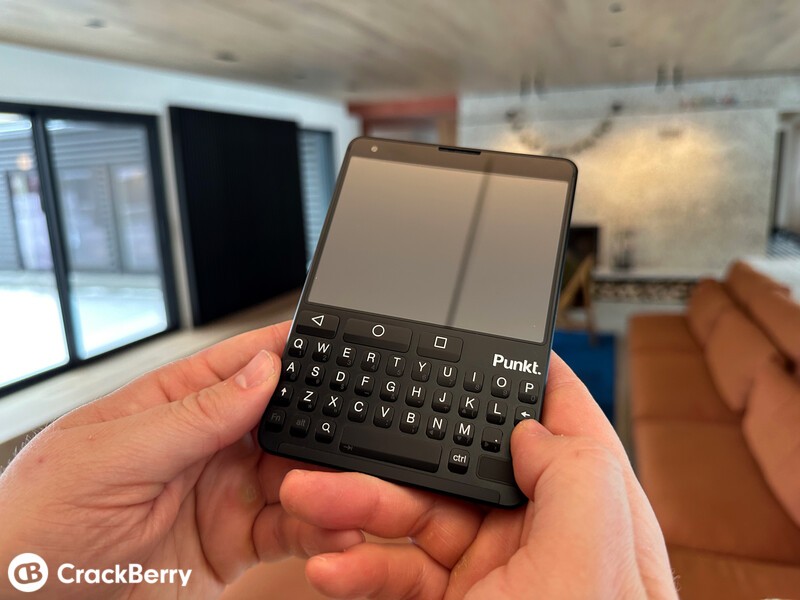 What you are looking at is both history and (hopefully) a future reality. Before I dive into the details and the story behind the Punkt MC01 Legend smartphone with a full physical qwerty keyboard, I need to first set up the story.

Just over a week ago, I named the Punkt MP02 mobile phone as one of my Favorite Top 22 Tech Things of 2022. If you're not familiar with Punkt, it's a Swiss technology company that's been around for more than a decade building iconic tech products. And if you're not familiar with Punkt's MP02, be sure to check out that writeup, but the quick take is that it's a timelessly-designed phone that serves a niche audience of individuals seeking a more minimalist phone experience. The MP02's lack of touchscreen and old-school T9 typing input somewhat force you to use your phone less — putting my SIM card into the MP02 in 2022 provided the therapy I needed to start limiting my screen time and social scrolling addictions and get my brain working again.

Punkt saw my post and apparently appreciated it and the Top 22 of 2022 accolade, and two days later the company reached out, asked for my mailing address, and told me to give them a call once a "package" arrived.

That package landed at my door Friday, and when I opened it my mind. and more importantly, my thumbs, were blown away (figuratively). I was holding a proper full QWERTY phone with physical buttons that looked good and felt oh so right ... and there was no BlackBerry logo at all.

Following up with Punkt to get the details, I learned they dubbed the device the "MC01 Legend." MC stands for Mobile Computer. The story behind the word Legend takes a bit more unpacking.

The MC01 Legend is a passport-size phone that feels ultra comfortable in the hand, and it features a physical keyboard and timeless design that mirrors the design language of Punkt's MP02, or more specifically, its predecessor the MP01.

🔥The Punkt MC01 Legend is the post-BlackBerry QWERTY phone your thumbs deserve! Full story of this passport-sized smart messaging phone is up on https://t.co/IKKJGB1Xbb! pic.twitter.com/lNsuxsLvPf

Diving deeper into Punkt history, it turns out the MP01 and MP02 mirror the MC01's design language, as Punkt, along with its renowned design partner, Jasper Morrison, cooked up the concept for the MC01 in 2015 prior to a pivot and launch of the MP01. (I'll get into the details of that pivot shortly.)

This is where the Legend comes in. Speaking to Punkt's founder, Petter Neby, I learned that the MC01 has been in his mind for years and he still thinks about it daily. It is a phone he strongly wants to commercialize — both for himself to use and for all of us who crave a quality post-BlackBerry messaging phone delivered in a package that doesn't compromise privacy. Until he's able to do that, the MC01 remains, well … just a legend.

Using the prototype Punkt sent me, I can't understand why the Legend never made it to market. As an object, it feels absolutely perfect in my hands. It gets the feeling totally right where the BlackBerry's revered Passport missed just slightly. While many CrackBerry readers absolutely loved the "work-wide" vibe and feeling of the BlackBerry Passport, I felt the ergonomics were always a bit off; holding it in two hands, the keyboard felt too low for your thumbs to comfortably type given the dimensions and center of balance.

With the MC01 Legend's angled backside, which gets thicker towards the top of the phone, it creates a perfect balance and place for your index fingers to rest, putting your thumbs smack dab over the middle of the keyboard. It's a lovely feeling. For anybody who wants a smart messaging phone with a physical keyboard and solid build quality, this phone is magik that needs to happen.

The design is truly timeless, and given it is a seven-year-old design it still looks fantastic. With the initial intent behind this phone to run Android Marshmallow (the latest version of Google's Android OS at that time), the only thing dating it by 2022's standards are the navigation buttons to the left of the Punkt logo, which could be shed thanks to the BB10-like swipe gestures that made their way into the latest versions Android.

Neby also informed me that there is an "extreme secure" version of the Legend hardware, with mechanical on/off sliders for microphone, camera and Bluetooth.

Why this phone never came to market

My first question before learning the backstory of the MC01 Legend was, of course, "When can I buy it?"

The Legend is ultra comfortable in hand, with a full physical keyboard and timeless design.

As much as I loved the MP02 as a minimalist phone, I know I would love the MC01 Legend even more as an on-the-go messaging machine. And the market for a phone like this would clearly be a lot larger than the more niche MP02.

Punkt provided reasons why the company didn't bring the phone to market in 2015 and why it hasn't done so yet, and it boils down to two primary problems, one technical and one philosophical, both related to the same word: Android.

Android doesn't play nice with this size of screen. With the vast majority (nearly all) smartphones running in portrait orientation, Android and Android Apps haven't by default been able to scale nicely to fit a screen size and ratio like the MC01 Legend's.

Punkt is 100 percent against Google's use of personal data. This pertains specifically to Android running Google Mobile Services, a.k.a., the version of Android that Google puts out there for phone manufacturers to license that brings the Google Play App Store and other Google services onto the OS. When you accept the terms and conditions and use an Android phone with GMS, you are paying for the OS with the data Google collects on you. While most people may not care about that, Punkt says it genuinely does. The company believes as an individual you should own your own data and that privacy ownership over your data is your right and one that you shouldn't be forced to give up if you want to use a product.

While the technical challenge could be overcome with some effort and investment, Punkt came to the decision after much debate that it simply could not put Android with GMS onto any product that uses the Punkt name and still feel good about it. That would compromise the company's principles they were founded on and live by.

For those reasons, the project got shelved, and Punkt pivoted to bringing the MP01 to market with an aim to eventually get the MC01 into users' hands, as well.

The MP02 is powered by a bespoke OS commissioned by Punkt, specifically for this device, known as Aphy 1. On a small phone with non-touch screen input, you don't get much insight into what Apostrophy is all about, other than it is extremely secure and works well enough to power the device and its basic features.

This is where the conversation with Punkt became much more forward-looking and really interesting instead of just our talking about the history of the MC01 Legend.

Under the hood, Apostrophy is shaping up to be a company with much bigger ambitions. The version of Aphy in the MP02 represents some initial baby-steps towards a full blown mobile OS, known as Aphy OS.

Punkt genuinely believes we should own our data and it's committed to user privacy.

While Punkt is a customer and early investor in Apostrophy, Apostrophy AG is a standalone company working to bring a new OS to market that aims to serve as a viable alternative to Android with GMS. As relayed to me, the goal is to provide an OS experience where you can still to do all of the things you'd expect to do on a modern full-touch smartphone, with all the apps you want, but delivered without any of the unknowing data-tracking and monetization that occurs when you accept Google's Terms of Service.

Apostrophy is a Switzerland-based company, which really sets the stage for what this is all about. Europe has strict rules when it comes to privacy and data protection rights, and Switzerland is even stricter. In true Swiss fashion, Apostrophy aims to be neutral, in that it will provide an actual alternative to iOS where the user is put first, not their data. The company doesn't view Android with GMS as a viable option for anyone who cares about privacy.

In many ways, our conversation about Apostrophy reminded me of the early days of BlackBerry, and the principles reminded me of the many briefings I used to have with senior executives and product managers at Research In Motion (RIM).

Putting the OS horse before the hardware cart

When TCL released the BlackBerry KEYone and KEY2, a lot of BlackBerry diehards bought it because of their love for the physical keyboard. However, many (maybe even more) people didn't buy it because the OS was Google Android. Instead, these folks kept holding onto their old BlackBerry OS and BlackBerry 10 devices with keyboards until they literally quit working.

Why? Because, like Punkt, they believe Android sacrifices too much, and they don't want Google to have all their data. In other words, they want that BlackBerry-like commitment to privacy even more than they want the physical keyboard.

Punkt told me that Apostrophy will start telling its story to the world soon as it gets ready for primetime next year. In the meantime, you can sign up for updates on its website at Aphy.io.

Punkt is also going to introduce me to the Apostrophy team, and hopefully, I'll be able to speak to someone and share more details soon. I experimented with other mobile OSes this year, including GrapheneOS, and Lineage, so trying to DeGoogle and explore alternatives is already an area of interest and a trend I think is only going to grow.

Punkt aims to bring a full touchscreen device to market running Aphy OS towards the end of 2023, and the company expects it to be an OS other OEMs will eventually offer, too. From there, the company hopes to turn the MC01 Legend into a reality, once there is an OS they truly believe in.

After Onward Mobility crashed and burned this year and failed on its promise to bring a new BlackBerry to market, I don't have much hope that we'll see a BlackBerry phone again. I'm more optimistic that a company like Punkt, along with an OS like Apostrophy, may eventually deliver a keyboard phone that we actually want.

My fingers thumbs are crossed!

Be sure to drop a comment with your thoughts on the MC01 Legend, share any questions you may have, or let me know if you're interested in possibly buying one of your own if/when it comes to market.

Disclosure Update: As of January 26, 2023, Kevin Michaluk became an investor and advisor in Apostrophy AG