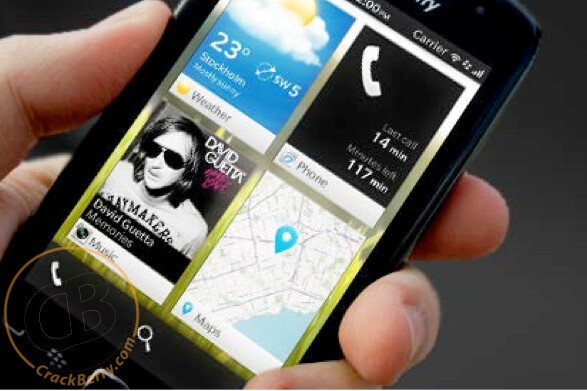 POW! Following up the first-look image of a BlackBerry 10 phone we posted two weeks ago, today the good ol' CrackBerry tip line received a pretty *interesting* email, to which was attached a 14-page .pdf file full of Cracktastic goodness. The document was clearly prepared by one of RIM's external ad agency partners as a BB10 briefing document, providing background information on BlackBerry 10 and outlining some of the OS features and ideas for how to position BlackBerry 10 in future advertising campaigns. BlackBerry 10 Phones may be months away still, but judging by the document it appears the behind-the-scenes work to begin marketing the next-generation of BlackBerry phones is already well under way.

Of course, the best part of the document wasn't what was written, but rather what was shown -- including some juicy OS imagery pointing to some of the things we can potentially expect to see in BlackBerry 10.

I pulled the images in this post from that document, and while the the hardware pictured throughout the .pdf was of BlackBerry 7 phones (Torch 9860s and 9810s), the OS imagery on the displays of those phones was made out to be of BlackBerry 10. There are some exciting takeaways here. Back in November when we saw the first photo of a BBX phone dummy model, the homescreen user interface on that device looked much more like a scaled-down version of the BlackBerry PlayBook OS. We've known that BlackBerry 10 will build on the PlayBook OS and feature some UI changes to better suit the phone experience, and these screen caps illustrate some of these changes.

One rumor I've actually been hearing of for a while now but had yet to see evidence of was that with BlackBerry 10 Research In Motion will finally introduce their own version of "widgets" to the homescreen experience. The image above seems to confirm that notion, drawing inspiration from Android's widgets and Windows Phone's Live Tiles to bring useful mini-app experiences to the homescreen.

On the image below you can see also see the updated icon tray, which features new artwork and icons that are much smarter than those of BlackBerry 7. Note that the Folder icon shows the icons of applications inside, and the Pictures icon shows a photo from the album within. The clock icon even shows the time of the next set alarm. Heck, Cut the Rope, which was recently released for the BlackBerry PlayBook, also made the icon tray (the date of this document is very new, by the way).

The next image shows off the Universal Inbox, which we've already seen in action on the BlackBerry PlayBook OS 2.0. Perhaps the biggest thing to point out here are the names of the people within the email app. For example, a quick Google search for Erica Josefsson will bring you to her Linked in Profile which shows she's part of RIM's User Experience Team based out of Malmo, Sweden. Cleary the design work of The Astonishing Tribe is at work here.

The final image shows off a super sexy caller display screen. And note the icon for video chat? Safe to say the front facing camera on BlackBerry 10 phones will be put to use easily.

Put these few images together and things are looking really promising for BlackBerry 10. That of course assumes all of these features pan out to be part of BlackBerry 10 on phones. Looking at the document, I have no doubt that the the OS screencaps were supplied by Research In Motion to the ad company, but looking at the fact it is "partner" material with the final document produced by the partner it's always possible that changes were made and that what RIM provides as working materials could be different than what RIM will ultimately launch with.

That said, I like what I see, so definitely hope this is a good hint of what we'll see when BlackBerry 10 phones hit the market later this year.