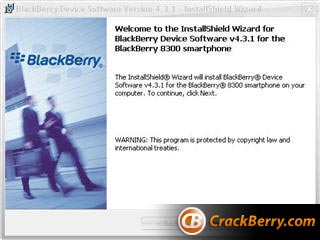 With the BlackBerry 8130 now shipping with OS v4.3, we knew it wouldn't be too long before this updated operating system became available for other members in the BlackBerry family as well. From what I've seen today, the Curve and Pearl 8100 won't have to wait much longer to enjoy 4.3's full benefits.

Back in August we ran some leaked screenshots of a BlackBerry Curve running OS v4.3. Today we'll take it a step further and give some hands on feedback with v4.3. But first...some pictures!

Just incase you're skeptical that the Camera in your BlackBerry Curve will be able to record video... the following video provides the proof and also takes a quick look around some of the easily noticeable improvements to OS v4.3.1.

Your Curve will soon be able to record video!
Can't record while plugged into the USB, hence this message

We knew this would be there

Here it is! Videos taken with an AT&T BlackBerry 8300 Curve (and uploaded immediately to youtube) thanks to the soon to be released OS v4.3!! If you own a Curve and update to v4.3 when it comes out, you too will be capturing your own vids!! The first video of Bruno is with the bedroom lights on. In the second video, the bedroom lights are turned off (the room is dark) and the Curve's flash is kept running throughout the recording (what a nice feature for RIM to include!). Good Boy Bruno, Good Boy!

Bruno the Dog!
In the Dark with the Curve's Light Feature Turned On

Pearl Gets the Voice Recorder,
No Video Recorder

More To Come: In-Depth Video Walk Through Still to Come. Ran into a little installation hiccup on my Curve that needs to get resolved first (she went into a vicious power on/power off cycle when I was 90% of the way through the install. Pretty sure I had wayyy too many apps loaded up on the device/no free memory when I tried to do the update). Do it have installed successfully on another Curve & Pearl (where the screenshots & vids above came from), but no video recording capabilities at the location where those devices reside. Working on it though. In terms of release date, before the end of the year is the plan. 4.3 will be available to all devices from the 8700 and up. The Curve gets Video Recording and Voice Recording, the 8100 Pearl just gets Voice Recording (no video recording from what I can tell at this point), and I'm guessing that will be the case with the 8700/8800 too since they don't have cameras! Lots of exciting little refinements! Stay Tuned for more...