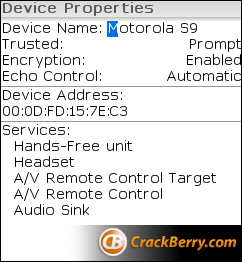 At the beginning of the month I published hands on proof that the soon to be released BlackBerry OS 4.3.1 would enable video recording on the Curve. In all the excitement surrounding that huge news, I neglected to notice a MAJOR improvement that OS 4.3.1 brought to my BlackBerry Pearl 8100 - A2DP Stereo Bluetooth Support!!!

Prior to OS 4.3.1, stereo bluetooth devices (like Motorola S9s or BluAnt Sonic Portable Speakers) would not work with my Pearl 8100. Installed the beta of OS 4.3.1 and Voila...they work!!!!

Going the detective route and opening net_rim_bluetooth.cod in Notepad, a search for A2DP yields all sorts of listings, most notably the use of the net.rim.bluetooth.a2dp code library in the module.  The OS 4.2.1 version does not list this (it only has one listing for 'a2dp'), although it is found in all versions of OS for the 8300 series.  Further evidence to prove what my ears are already telling me!

The newest BlackBerrys to hit the market have A2DP support - the BlackBerry Curves (8300, 8310, 8320) and the Pearl "2"s (8120, 8130) are all good to go for listening to streaming audio over bluetooth stereo accessories. But older BlackBerrys, like the Pearl 8100 and BlackBerry 8800 lack that support. It seems with OS 4.3.1 that will no longer be the case. I think it is fairly safe to say that all BlackBerrys with media card expansion slots will support A2DP once OS 4.3.1 is installed.

HUGE Kudos to RIM for its ongoing commitment their devices! The only question now is when are we going to see the OS 4.3.1 update get released? December is almost here... and OS 4.3.1 sure would be the perfect present for sooo many of us BlackBerry Addicts!