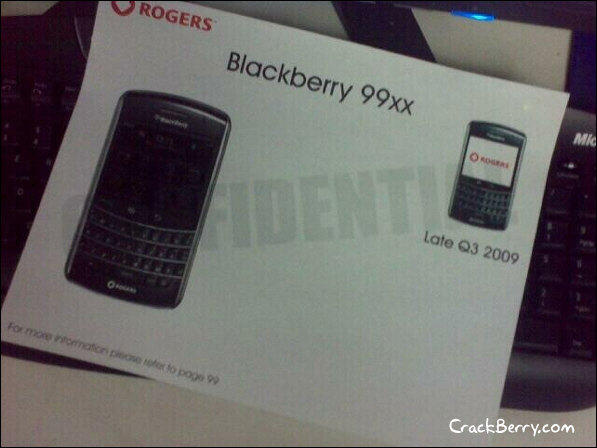 * Update 2: Definitely see our updated post on this one - Could be a photoshop and we've got some follow up details on the Pluto project you'll want to read. *

*Update: So we've got a bit of question mark on whether or not the 9900 will ultimately hit the market with a SurePress display (screen that moves and clicks) or just a standard fixed touchscreen. We've known that earlier prototypes of this model have had the SurePress Storm-styled clickable screen, but are also hearing that part of what Vodafone/Verizon sealed up with their Storm exclusivity deal was the SurePress technology, at least for a while. So for now we're going to leave a question mark on this. And in the comments you can let us know what you'd prefer - a Touch Bold with a screen that clicks (a la Storm) or a fixed touchscreen.  Ahh...gotta love the rumormill games! *

Holy FRAK. Here ya go. Just when we're starting to get excited for the CDMA BlackBerry 9630, here's a first real image of the BlackBerry 9900 (looks like the image itself used in the Rogers document is from a RIM device simulator). This is what has been referred to as "Pluto" for sometime now.

So what's the BlackBerry 9900 all about? We're talking about a BlackBerry Bold style-device with SurePress Touchscreen. Like the Bold, it'll be a 3G device and use the same speedy processor. What it will not have is a trackball. Crazy. Wicked.

According to this document it's slated for Rogers Q3 release, though we wouldn't be suprised to see it hit in Q4. And of course, like the Bold, we'll see this rollout to GSM carriers around the globe. Excited much??!!!