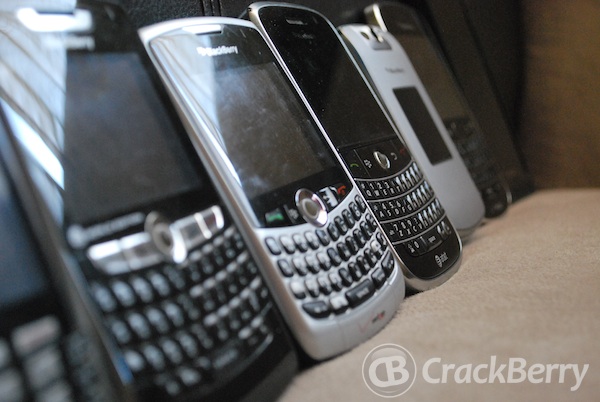 BlackBerry Smartphones have come a long way since the original models were introduced way back in 1996. And I mean a loooooong way. The first devices were not really even smartphones at all. BlackBerry got its start improving upon pagers, with the introduction of the 850 Interactive Pager.

That's a far cry from today's 9000 series smartphones that feature color screens, wifi, microSD slots, GPS, Bluetooth and so much more. BlackBerry has moved from a trackwheel to trackball to trackpad to full touchscreen -and BlackBerry 10 promises to take the experience to a whole new level. So as we look forward to BlackBerry 10, let's take a nostalgic trip down memory lane and check out the evolution of the BlackBerry Smartphone - in pictures.

The Evolution of BlackBerry Devices

While this is a pretty good size sample of BlackBerry devices, keep in mind that it's not every model and color that was made available (there are quite a few).

The 8000 series was the start of the "consumer" devices. These models included an updated color screen, more memory, a microSD slot, camera and more. The Pearl 8100 was also the first to introduce the new trackball naviagtion, breaking away from the trackwheel that had graced other devices. The name Pearl came from the look of the trackball on the device.

The 8000 series includes the well known Pearl and best-selling Curve lines of devices.

The Curve 8520/8530 was the first device to introduce the optical trackpad, a replacement to the longstanding trackball navigation.

The Pearl Flip 8220 was the first BlackBerry flip phone made available.

The 9000 series is the most recent, beginning with the Bold 9000 launched in 2008. Dubbed the Cadillac of devices, the Bold 9000 is still a long fan favorite. The 9000's again featured updated hardware including better cameras, more memory, Bluetooth and wifi. This series included the first all-touch device, the BlackBerry Storm 9530 and the flagship Bold line.

The Torch 9800 was the first device running BlackBerry 6 and offered a slider form factor with both a touchscreen and slide out keyboard.

The Curve 9380 and Torch 9860 were full-touch devices perfect for users who prefered not to have a physical keyboard.

BlackBerry 10 will be released in Q1 of 2013. The "mobile computing platform" will be a fresh start for BlackBerry and bring two new devices, the L-Series (touchscreen) and N-Series (QWERTY).