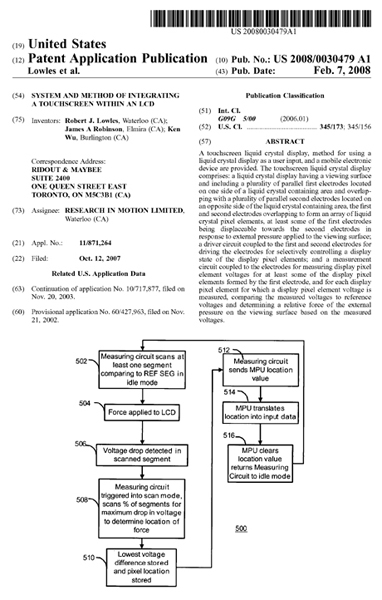 A new Patent Application from RIM went through to publication yesterday morning, entitled SYSTEM AND METHOD OF INTEGRATING A TOUCHSCREEN WITHIN AN LCD. It's hard to not get excited about this if you reside in the BlackBerry camp wanting to see a Touchscreen BlackBerry added to RIM's offering. And according to our buddy Russell Shaw who posted the story, we may not have to wait TOO long to see it (he estimates 3 months). Russell's reasoning? Most patent apps take about 18 months to hit publication once they have been submitted. This one only took four months - and apparently this isn't a sign of USPTO efficiency, rather, a sign of a products imminent release. Three months would put a touchscreen BlackBerry announcement just in time for WES. I think that's probably overly optimistic thinking at this point, but would love to see that be the case!

Proposed in the patent: