Nearly 60% of new Nokia Lumia 900 and HTC Titan II Windows Phone users were former iOS and Android owners. I think we'll see a lot of iPhones and Androids hit the trash too when BlackBerry 10 makes a play. 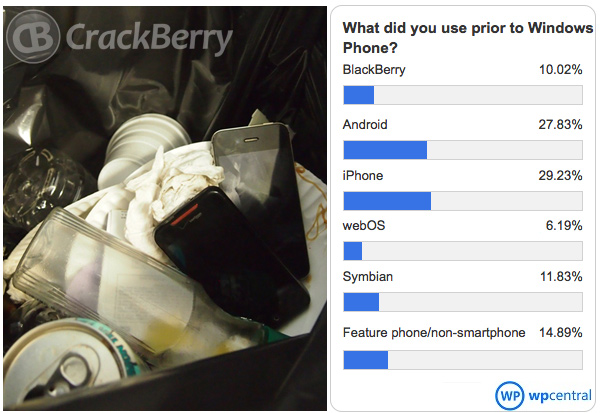 Looking at the sales of Android and iOS devices over the past 18 months, there is no denying these two mobile platforms have a ton of momentum in the marketplace. Especially in the USA, where demand for BlackBerry has been hit the hardest, it's almost felt like all roads have been leading to Apple and Android at RIM's expense. Indeed, many long time BlackBerry owners have left the platform when the time for an upgrade came, and a massive percentage of first time smartphone owners have overlooked BlackBerry.

But it's a mistake to think the game is over. As the recent decline of BlackBerry has demonstrated, consumers are less loyal than you may think. Of course there are tech fans who are extremely loyal (myself included), and most of them live on our Mobile Nations network of sites, but there are always new devices and gadgets hitting the market and people do move around. And yes, people even leave iOS and Android.

Case in point, take a look at the results above from the poll that was posted last week on our Windows Phone site, WPCentral.com. Asking new Nokia Lumia 900 and HTC Titan II owners what phone they had before buying their new Windows Phone, I was pleasantly surprised to see nearly 30% were former iPhone and Android phone owners (over 3,000 respondents). This is obviously good news for Windows Phone right now but I think it's also GREAT NEWS for BlackBerry 10 when it debuts later this year. It's proof that even Android and iOS are not immune to defection. And though a lot of people may currently walk down a path that takes them to Android or iOS, when their upgrades come due, there will be many willing to leave to try something else.

Everyday that goes by without BlackBerry 10 on the market RIM is definitely losing out. But unlike sports, the mobile game doesn't get played season to season. It's an ongoing game, and as long as you're in business you're not out of contention. RIM just needs to make sure they have all their players in position -- software, hardware, apps, marketing -- so they can take a clear shot when BlackBerry 10 phones hit the market. If they score, people will cheer... and buy.