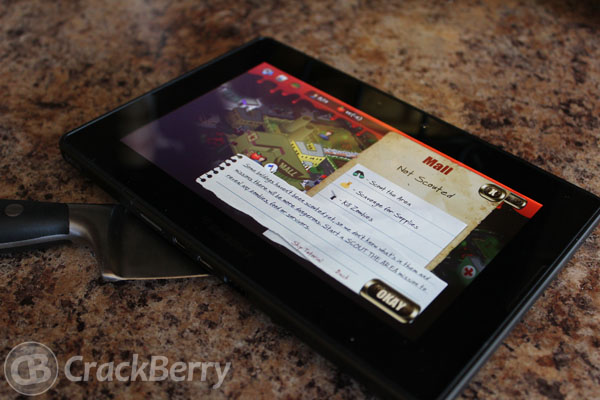 If you're into brushing up your skills on surviving the zombie apocalypse, then the newest zombie game to hit the BlackBerry PlayBook, Rebuild, may just be something you're looking for. The idea behind this game is that you're trying to defend your town, but you can't do it alone so you've convinced other locals that have taken refuge in surrounding buildings to team up against the zombie invasion. I must warn you, if you've started to play the game and are thinking that the first few zombie rounds are a walk in the park just wait till you have successfully reached day ten and eleven, that's where the fun begins.

One of the coolest things I wanted to point out isn't even a part of the game, it was the experience this developer had working with RIM and the BlackBerry platform. In this case the developer originally worked solely with Apple and their iOS platform, but was lucky enough to be giving a PlayBook from RIM during the GDC (Game Developer Conference), and this sparked interest within the developer. She quickly got started on using the Adobe Air development platform to bring Rebuild over to the PlayBook. When I read the developer's email it came with a piece of text that I just had to put into this post

"I'd like to let other developers know how easy this was and hopefully it will help bring more apps to the PlayBook."

So I guess there's another myth busted for the BlackBerry platform, it is easy to port your games over and build success on the PlayBook and future BlackBerry 10 devices. Now my question is, which developer will be next? If you're feeling like you could hone in your zombie fighting skills than I recommend picking this game up from BlackBerry App World for $2.99, because you never know when you'll be face-to-face with the undead.