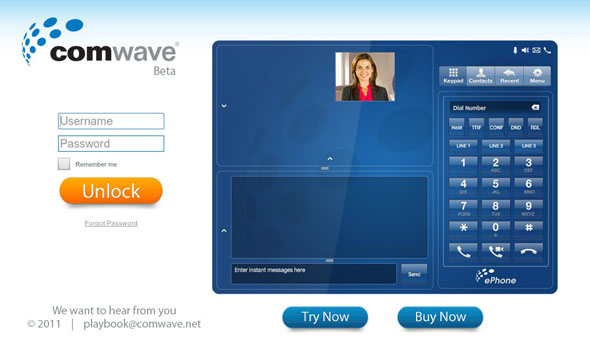 So last week, we mentioned an alternative to Video Chat on your PlayBook called ePhone. The service extended calls to nearly 60 countries, with free voice and video calling between ePhone users and monthly allotment of minutes for contacting those without ePhone. Check out more details here. Today, they made an announcement that extended their service even further; allowing people to make and receive calls from their Macs and PCs. This extension is - ePhone Anywhere, which is rather fitting.

ePhone: Allows PC and Mac users to make and receive free local and long distance calls to the world for just $20/year, from any computer in the world. No software to install.

ePhone for PlayBook: The PlayBook App that allows you to make and receive free local and long distance calls to the world. For just $20/year, all from your PlayBook.

ePhone Anywhere: This includes the PlayBook App and PC & Mac combined for $30/year.

Many of you have requested the ability to place and receive calls from your PC & Mac computers. Well… we have listened and done one better, it’s called ePhone Anywhere. With ePhone Anywhere, you can make and receive calls from your ePhone PlayBook App AND from any computer in the world, by simply logging into www.comwave.net/ephone. ePhone Anywhere is just $10 more than our regular ePhone and as always, you get your own phone number and free local and long distance calling to 57 countries for a full year.

And more good news… if you don’t own a PlayBook, now ePhone is for you too. For just $20/year, anyone anywhere in the world can use ePhone to make and receive calls from their computer. So spread the word and tell your friends. Video calling is also supported between all ePhone users for free.

Still being in beta, Comwave has acknowledged a known issue in which phonebook entries which are not being saved as requested. They gave a resolution ETA of 1 to 2 weeks. Remember that they give a 3 day free trial, and 100 minutes, to play with before you decide if ePhone is for you.