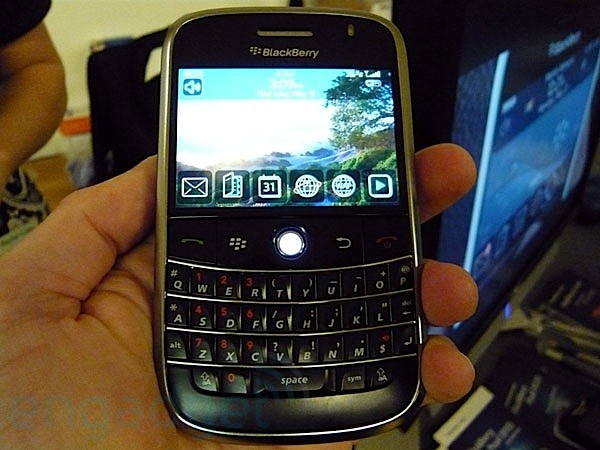 The boys at Engadget finally got some hands-on time with the BlackBerry Bold and like me, they came away "happily impressed"...

To start things off, the keyboard felt easy enough to use, at least easier than the 8830 we're often forced to use for work email. Gone are the sharp protrusions, replaced with a nice flat surface upon which to click.

Of note was the Bold's user interface. Menus are clean and easy to read (despite some strange icon choices, see below), and response time is about as quick as one could hope, especially compared to other phones out there that seem to struggle with their operating systems.

The unit's HSDPA radio was turned on, and web browsing was quick and nimble, bringing up a mobile version of Engadget in no time. Pocket applications of Word, Excel, and PowerPoint were on display, and combined with the bright screen and UI response time, actually felt like something a business mack could use.

Cons? They weren't that happy with camera (functionality was "passable") and they found the shortcuts used on the default theme to be a little confusing, but that's no biggie - a whack load of themes will surely hit the market as soon as a revamped Plazmic Theme Builder becomes available.

It's hard to believe that it was MAY 6th when we put up the web's first full-out review of the BlackBerry 9000. If you're interested in the BlackBerry Bold and haven't checked it out yet, it makes a for a comprehensive read. Now we just need to see the Bold get released! In tonight's RIM Investors' call, co-CEO Jim Balsillie made it clear that the Bold has been passing all of the carrier testing with flying colors. Sure seems to me like AT&T is aiming for an August release instead of July release for reasons other than the technical reasons rumored earlier today. For shame AT&T...haven't you heard?? the "BlackBerry Bold is Pimp'n...the iPhone Tripp'n" :-)