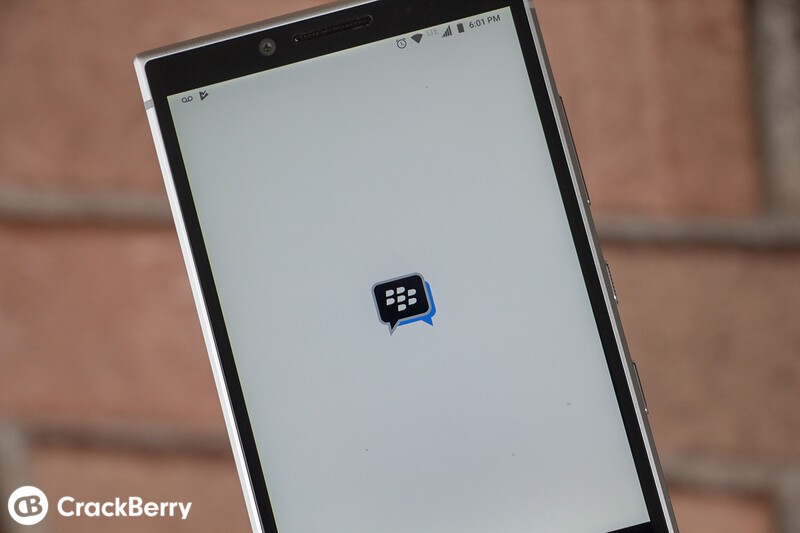 Back in 2016, BlackBerry announced a new partnership with Indonesia-based Emtek to help expand the consumer BBM business. As part of the partnership, Emtek expanded the capabilities of BBM for consumers with new features and enhancements while BlackBerry maintained control over their BBM Enterprise solution. Now, in a bit of surprising news, Emtek has announced their decision to end service of BBM for consumers on May 31, 2019.

Today we're announcing that we will be closing BBM consumer service on 31 May 2019. Three years ago, we set out to reinvigorate BBM consumer service, one of the most loved instant messaging applications, as a cross-platform service where users can not only chat and share life experiences, but also consume content and use payment services.

We poured our hearts into making this a reality, and we are proud of what we have built to date. The technology industry however, is very fluid, and in spite of our substantial efforts, users have moved on to other platforms, while new users proved difficult to sign on.

Although the announcement is certainly not the best for consumer users of BBM, it does not mean BBM, which has been running on BlackBerry smartphones since August 1, 2005, has come to an end. In light of Emtek's decision, BlackBerry has announced they will be making their enterprise-grade end-to-end encrypted messaging platform, BBM Enterprise (BBMe) available to individuals through the Google Play Store starting today and the Apple App Store soon. The change does not affect BBOS or BlackBerry 10 users as BlackBerry continues to provide that service rather than Emtek.

"While we respect Emtek's decision, we're disappointed the platform did not thrive and grow as expected," said Mark Wilson, Chief Marketing Officer, BlackBerry. "After much consideration, we decided that BBM's loyal users should continue to have a secure messaging platform that they can trust."

As part of the transition, BBMe will be available for free for one year and after the first year, a 6-month subscription will be available for $2.49 USD. In addition to the Android, and iOS versions, BBMe is also available on Windows and Mac and offers many of the features BBM consumers are already familiar with such as group chats, voice calls, video calls, as well as the edit, retract and expiring message options. You'll still also be able to see when messages are received and read, send voice notes, files, and your location as BlackBerry highlighted in their announcement.

Why Working Professionals Should Say, "BB(Me)"

BBMe is a secure messaging platform that also protects your privacy. Because BlackBerry does not monetize data, the service won't ask for a phone number, suggest contacts to users, nor does it desire to know where users are messaging from, or what is being shared. The service only requires an email address to sign up unlike other apps.

BBMe can be downloaded on any device that uses Android, iOS, Windows or MAC operating systems. The sender and recipient each have unique public/private encryption and signing keys. These keys are generated on the device by a FIPS 140-2 certified cryptographic library and are not controlled by BlackBerry. Each message uses a new symmetric key for message encryption. Additionally, TLS encryption between the device and BlackBerry's infrastructure protects BBMe messages from eavesdropping or manipulation.

From a feature perspective, BBMe users can conduct group chats, voice and video calls, as well as edit, retract, or set an expiration time on a single message. They'll also know when a message is received and read, and have the ability to share files, voice notes, and their location. BBMe for individual use can be used on up to five devices simultaneously.

In a way, ending BBM for consumers is kind of taking it back to its roots considering it was originally intended to be part of the BES 4.1 launch and back then it was a pretty basic app that focused on being fast, low-cost and low-bandwidth whereas today consumer BBM serves as a social media, m-commerce, gaming, and advertising platform, as well as a collaboration tool and so much more. Arguably, that 'so much more' was a bit too much and BBM became a bit bloated for some with all the games, channels, features and ads. BBMe sticks to the core basics of BBM and doesn't feature things such as BBM Channels or the BBM Shop or ads.

While having the option to move to BBMe is great, as it means those who wish to continue to use BBM can do so, it's certainly not going to be ideal for everyone and there's a bit of an end of an era feeling to the announcements. In an effort to answer some of the questions surrounding the closure, Emtek has set up a FAQ section that covers a lot of the basics you'll need to know.