Just what is the Commercial Mobile Alert System (CMAS) and Wireless Emergency Alert (WEA)? We'll break it down for you. 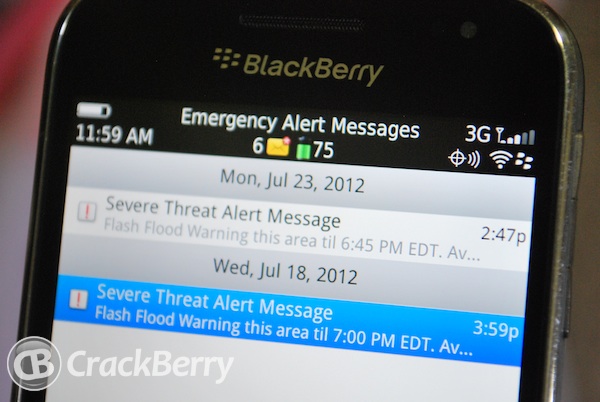 Last week we noted that many users received an emergency alert on some devices for a storm that passed through the East coast. In the comments it was noted that a bevy of other users across North America had also received alerts in the last few weeks. The messages are part of the Commercial Mobile Alert System / Wireless Emergency Alert (or CMAS / WEA respectively). This system is setup through carriers to broadcast alerts to users for sever weather, Amber alerts and presidential alerts. Keep reading as we look at just where these alerts come from and what makes them tick.

While some users assumed that these alerts are basic SMS, that isn't quite the case. The messages are part of the Cell Broadcast Service, which differs slightly from standard SMS.

Cell Broadcast is designed for simultaneous delivery of messages to multiple users in a specified area. Whereas the Short Message Service-Point to Point (SMS-PP) is a one-to-one and one-to-a-few service(requires multiple sms message, as each message can only carry one phone number), Cell Broadcast is a one-to-many geographically focused messaging service. Cell Broadcast messaging is also supported by UMTS, as defihttp://crackberry.com/node/add/blogned by 3GPP.

Essentially CBS is a "one to many" service while SMS is a "one to one" service. CBS dedicates part of a given network to messages all the time. If an SMS were sent to everyone in an area for an emergency, it would eat up network resources and cripple it, thus rendering it useless (also why cellular data is better than voice). Having dedicated resources, CBS allows for messages to be sent to many users at any time while still leaving the network open for other data like email and phone calls.

The alerts are issued by the President of the United States and agencies such as the National Weather Service, FEMA, the Department of Homeland Security and the Telecommunications Industry Association.

Ultimately it's up to the carriers and regulators to decide what alerts are sent out to customers at any given time, and they will only be received by those who have devices that support CBS (most newer devices do). The alerts are sent to geographic locations based on the location data from your SIM or device.

In most cases you also have the ability to disable all but the Presidental alerts, so you can choose not to receive threat or Amber alerts. And if you're in Canada for example, you won't receive US Presidential alerts since you're not in the US.

Lastly - that annoying tone that accompanies the alerts? It's mandated by the carriers - right down to the tone frequency -- so unfortunately you can't change it. It's sure to get your attention though!

If you're on a newer device running OS 7+ you can access your emergency alert settings by clicking on the Emergency Alert Messages icon, the press the Menu key and choose Options.