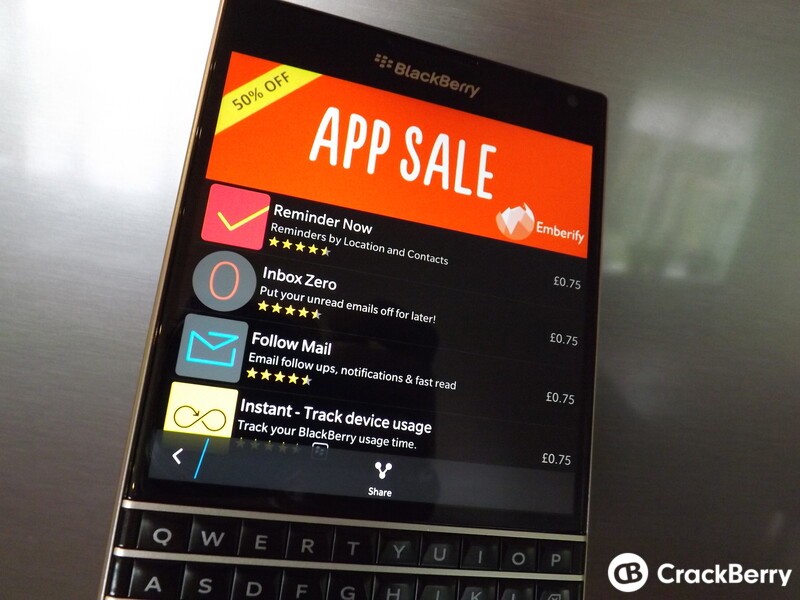 If you've previously liked the look of the the offerings from BlackBerry 10 developer Emberify, but were put off by the price, now could be the perfect time to snag a bargain. Starting today and for just one week, Emberify's apps are reduced in price by 50% - nice.

It's likely that if you head on over to BlackBerry World you'll see the Emberify app sale banner in the carousel at the top of the screen sitting loud and proud. All the apps are priced at $0.99, which is certainly attractive.

In addition, Emberify are offering up an extra treat. If you purchase all five apps and email a screenshot to [email protected] you'll receive a surprise. I'm not giving away the secret - you'll have to discover that one out for yourself.

Full details of the apps on offer can be found below:

Pune, India (April 16 th , 2015) – Emberify launches their complete app collection on a flat 50% off sale. All the apps will be available on sale for one week. Emberify develops productivity apps using context aware technologies.

"The sale will allow BlackBerry users to get their favourite apps on sale, this is a thank you for the support from Team Emberify," says Shashwat Pradhan, BlackBerry Elite Developer and the Founder of Emberify.

Emberify is a startup working on consumer based analytic and utility apps. Using contextual information, Emberify aims to create a more relevant mobile experience for their users. BBM Channel: C002FEE57

View all BlackBerry 10 apps from Emberify